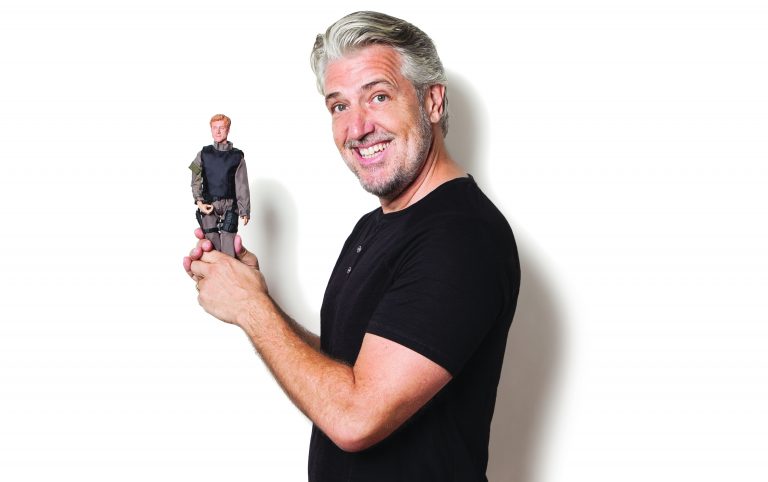 Ad man, author, and director-producer, the Irvine resident is a force behind the new web series “Con Man,” which premieres Sept. 30 on Vimeo on Demand and was funded by one of the most successful Indiegogo campaigns of all time. The show reunites characters played by Nathan Fillion and Alan Tudyk of the short-lived cult favorite TV series “Firefly.”

“Firefly” Continues in “Con Man”
“The idea is that Nathan’s character (from ‘Firefly’) goes on to these crazy levels of success (after the show is canceled). Alan’s character gets stuck in what (‘Firefly’ creator) Joss Whedon calls the sci-fi ghetto. He’s a Juilliard-trained actor who wants to be taken seriously and doesn’t realize there’s all this adoration right in front of him (at sci-fi conventions).”

Fan-Funding
“Con Man” broke Indiegogo’s record for most funds raised for a web series in 24 hours, hauling in more than $3.1 million overall. “Nathan and Alan together are magic, and I knew we would get a pop in the beginning. But I had to come up with a way to make the campaign work for 30 days. I needed an emotional trigger. The cancellation of ‘Firefly,’ and the desire to see those two together, was a great tool to keep the momentum going and reach the records we did.”

Real Life
Haarsma’s “The Softwire” young adult sci-fi books feature children orphaned in space and sold as slaves to aliens, an idea that sprung from his own childhood. “My summers were spent working in my parents’ ceramics factory. I would be so hot back there with all the kilns, I would write ‘slave’ on my chest and parade around and try to evoke sympathy from my parents. It gave me a strong work ethic, but as a 12-, 13-year-old boy spending my summers working, it wasn’t fun.”

Book Drive
He and Fillion started Kids Need to Read, an organization that gets books to students.
“I was at a school and one little girl told me, ‘I got a movie ticket for Christmas, can I trade it for one of your books?’ I had another little boy who said, ‘My daddy won’t buy me books. Can you give me one?’ I told Nathan these stories, and he said, ‘We’ve got to do something about this.’ ”