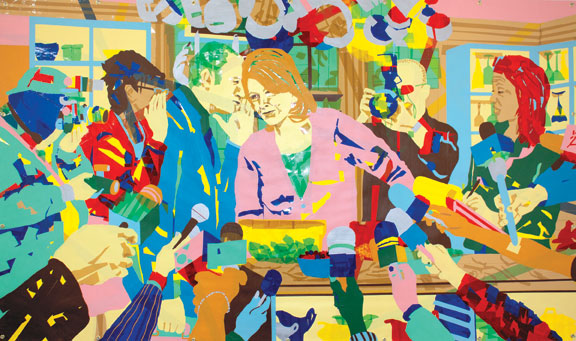 Background
Kuhl and Leyton met at Design and Architecture Senior High School in Miami. They attended Cornell University and began collaborating while studying in Rome, which is where they discovered acrylic tape as an artistic medium; the vibrant colors reminded them of Miami. Their recent work has focused on the relationship between crime and fame.

Creation
They get ideas from the news, and research potential topics. Once they have a concept, they combine downloaded images to create a composite picture. From that, they make a drawing and project it onto paper that’s more than 5 by 9 feet, completing the piece by layering on tape—acrylic tape for color, and bookbinding tape for opacity. “The development of our work is always as a team,” Leyton says.

Inspiration
The Stewart piece, inspired by her remarks on “The Early Show” when facing securities fraud charges, is in the first U.S. exhibition of “Elite Deviance,” the artists’ white-collar crime series, which includes Enron, Jack Abramoff, and Bernie Madoff. “We were inspired by the question of why a wealthy and often upstanding citizen would commit such a crime. How do you punish a crime of this nature and of this scale?”

This article originally appeared in the March 2013 issue.