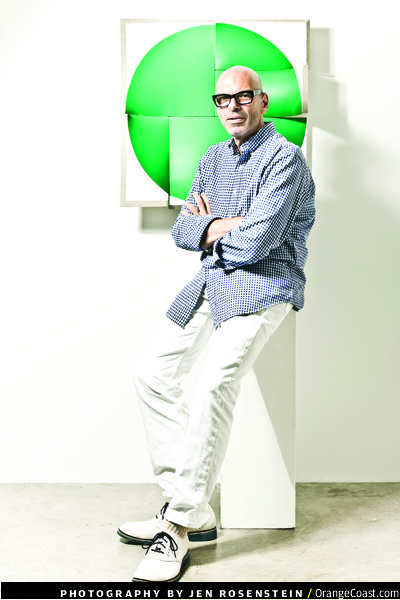 Background
When Blake saw a vacant space at the Village Faire Shoppes in Laguna Beach, he knew immediately that he should open an art gallery there—even though he was general manager of a restaurant and had never run a gallery. A lover of art and architecture, he decided to follow his instincts, which has led to success. His gallery is celebrating its 20th anniversary this year.

Focus
Blake first featured artists working in a range of styles and media. But in 2008, he again listened to his intuition and narrowed the gallery’s focus to minimalist, monochromatic, and abstract paintings. It’s a style, he says, “that’s always been part of my life,” even though it isn’t the easiest sell to collectors. He now represents about 20 national and international artists.

Location
Blake may be the city’s biggest booster. He was instrumental in the creation, 15 years ago, of First Thursdays Art Walk, and he led the transformation of the once sleepy Ocean Avenue, where his gallery now is located. His enthusiasm is contagious. “I’ve never known a time when I’ve been more proud to say that I’m an Orange County art dealer.”