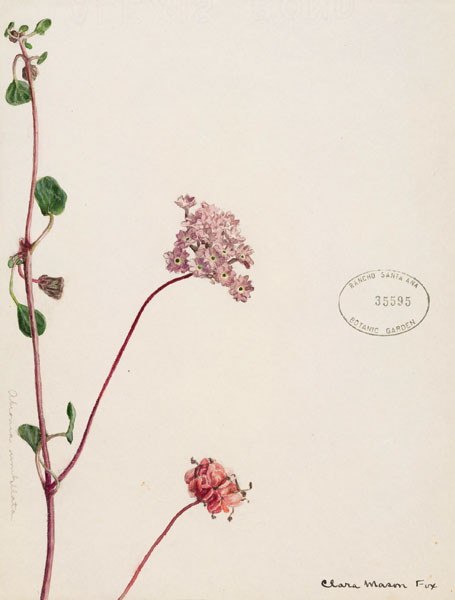 “Aunt Clara was an artist.” That’s all Lorraine Passero and husband Jon Seeman knew about his great-great-aunt, Clara Mason Fox (1873-1959). But after finding a box of letters and sketchbooks in his grandparents’ home, they learned the true breadth of her accomplishments. She taught school in Silverado Canyon in the 1890s, published books of poetry and local history, and was active in civic life. At Rancho Santa Ana Botanic Garden in Claremont, the discovery of more boxes—holding more than 150 of Fox’s botanic watercolors—led to a new appreciation of her artistic gifts and to her inclusion in an exhibit at The Huntington Library. (That’s her painting of Abronia umbellata, above). Passero, of Aliso Viejo, talks about piecing together Fox’s story.

How’d you trace Aunt Clara’s life?
A lot of genealogic research. The turning point came when I went to Laguna Beach City Hall for records on my husband’s grandparents’ house, and there was a write-up on it. The last line said: “It was designed by Clara Mason Fox, who wrote ‘A History of El Toro.’ ” I went to the historical society in what now is Lake Forest; all the docents have to read her book. One thing just led to another—it was as if Clara was pointing me in the right direction.

Most exciting discovery?
A ticket from a Cooper Union [for the Advancement of Science and Art] reception in 1897. I called the college
in New York City and learned she attended the women’s school of art there. She was 22.

Talk about the watercolors.
Most were from 1894 to the early 1900s. They had been put away in dark cabinets with plant specimens, so they’re well-preserved. Some seem almost three-dimensional, and some have notes on them about the plants. We only had her pencil sketches, so when I first saw those watercolors my eyes popped.

You’ve written a book about her for students ages 10 to 13. What can they learn?
People who settled in early Orange County had to be self-sufficient. I think she maintained that pioneer spirit.

Online Only
Browse a gallery of Clara’s art here.