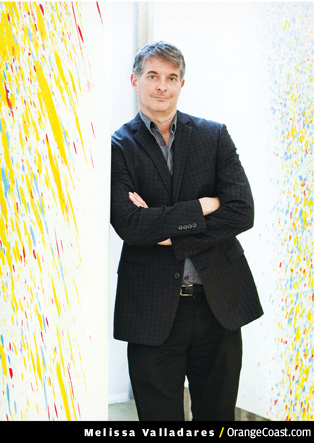 Dan Cameron had been chief curator at the Orange County Museum of Art only a month when he was tasked with a mammoth undertaking: overhaul the “California Biennial,” begun in 1984. After “Pacific Standard Time,” the sweeping 2011-12 SoCal initiative of exhibitions and programs that traced the region’s art scene, some thought the notion of a statewide survey of artists wasn’t necessary. “The biennial had to retool or die,” Cameron says. Taking its place this month is the “California-Pacific Triennial,” a show of 32 artists from 15 Pacific Rim countries. The diverse grouping ranges from Shaun Gladwell, a Sydney digital artist influenced by street and extreme-sports cultures, to Pedro Friedeberg, a modernist painter and sculptor with a cult following in Mexico, his adopted country.

Why the Pacific Rim?
I asked myself two questions: First, where is California? It’s on the West Coast, but if you think about it vis-à-vis the Pacific Ocean and China, it becomes more interesting. I think the Pacific has replaced the Atlantic as the stage for the most important cultural exchanges. I also asked, who is California—where did our ancestors come from? The Pacific has been a major area of artistic investigation, but hadn’t been explored in California.

Is exciting work being produced in particular areas?
If you’re an art lover and not plugged into the contemporary Chinese art scene, you’re missing a lot of excitement and fun. Because of the increased [number] of millionaires in China, it’s growing by leaps and bounds. Mexico City has a phenomenal art scene. There are good university galleries and museum spaces, and enough collectors to make it exciting.

How did you choose pieces for the show?
Curators work with their own libraries, and that’s a good [place to] start. I attended exhibitions and made studio visits; I’ve been to about a dozen cities, and 70 to 80 studios. I’m a believer in the role of memory. The best art you keep going back to over time; if I can’t stop thinking about it, that’s the response I’m looking for.

Online Only Browse a gallery of selected works here.