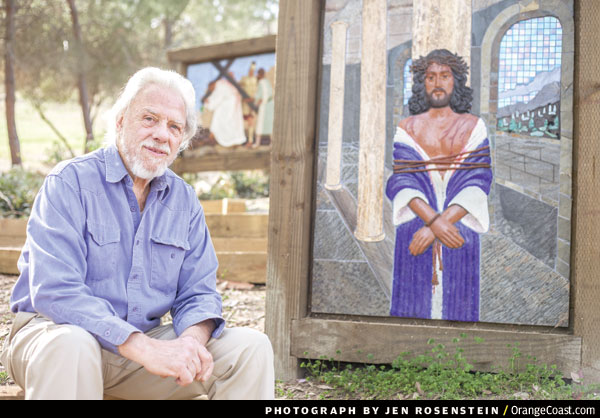 The 1971 retro sci-fi, 100-foot mural in Jimi Hendrix’s Electric Lady Studios in New York City wouldn’t seem to have much in common with the 15 mosaic Stations of the Cross at Saddleback Church’s Rancho Capistrano property. But for Jost, the 72-year-old artist behind both projects, they convey his spirituality and belief in eternity. His other work includes bronze sculptures, polyurethane paintings on aluminum panels, and a fountain and mosaic commissioned by his hometown of Dana Point.

How’d you get the Hendrix gig?

Mike Hynson, co-star of “The Endless Summer,” was going to make a documentary about a New Age festival in Maui, and Jimi Hendrix was going to score it. I suggested to Mike that I do the movie titles, so he introduced me to Jimi’s manager. They loved my work, and then he said, “We want you to do a mural in New York City.” I saw it as an opportunity to make a message dear to my heart.

The setup for the Stations of the Cross?

Rancho Capistrano is a gorgeous property with old Spanish buildings and a wonderful spring and a lake. There’s a path behind the lake where people can walk
and see the mosaics. All the details and figures I sculpt in relief and cast them in glass. It’s not a painting that will fade—these will still be here when Jesus comes back.

What does the project mean to you?
I like to speak to the secular crowd, but I wanted to do a work for
a church; Michelangelo and Leonardo and all those folks hooked up with the pope and did things that still inspire people throughout the world. I’m blessed to have the opportunity to do this. Every time I see the stations, it opens my heart.

Photograph by Jen Rosenstein
This article originally appeared in the April 2014 issue.