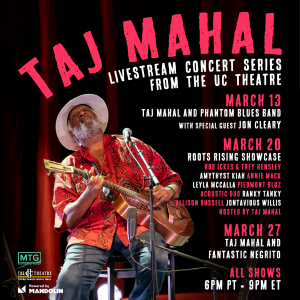 Individual, Group and Series tickets are on sale now at Mandolin.

Includes one entry into one livestream concert.

This ticket is intended for group viewing within one household.  Includes entry into one livestream concert.

This ticket is intended for group viewing within one household.  Includes entry into all three livestream performances.

A portion of every ticket sold will benefit Soka Performing Arts Center.

Soka Performing Arts Center, located on the campus of Soka University of America in Aliso Viejo, California, is in its ninth season of presenting the best of live performances. The 1,100- seat Concert Hall features world-class acoustics designed by Yasuhisa Toyota, acoustic designer of noted performance venues like Walt Disney Concert Hall in Los Angeles and Suntory Hall in Tokyo. Designed to truly reflect the University’s commitment to sustainability, the Concert Hall and adjacent Maathai Hall (featuring the Black Box Theatre and a dance studio) have been built to Gold LEED standards and feature vegetated green roofs. Photo voltaic cells on the Soka Performing Arts Center roof generate approximately 15% of the facility’s electrical needs.

About Soka University of America

Soka University of America is a private, four-year liberal arts college and graduate school in Aliso Viejo, CA. Soka University offers an 8:1 student/faculty ratio and study abroad for every undergraduate student. Founded upon the Buddhist principles of peace, human rights and the sanctity of life, SUA is open to top students of all nationalities and beliefs. About 55% of Soka University’s students come from the US and 45% have come from more than 60 other countries. Admitted students whose annual family income is $60,000 or less may be eligible for full tuition Soka Opportunity Grants. Additional grant opportunities are available for higher income levels.