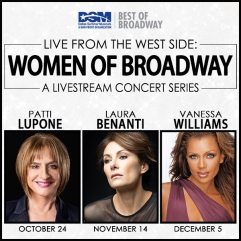 The second installment of the “Live from the West Side: Women of Broadway” virtual concert series features Tony Award winner Benanti, who starred on Broadway in “Gypsy,” “Women on the Verge of a Nervous Breakdown,” and the “My Fair Lady” revival. The concert, which will feature a mix of showtunes and pop songs, will be livestreamed from the Shubert Virtual Studios in New York.

Nov. 14 on the Segerstrom Center for the Arts website.