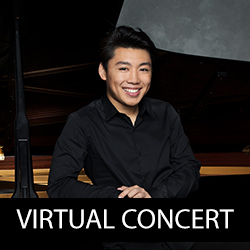 A classical pianist who’s been performing in concert halls since he was 10 years old, Li has played in venues from the White House to Carnegie Hall. After he received the silver medal at the 2015 International Tchaikovsky Competition, he began performing with philharmonics around the world, including a stint as the soloist in the Russian National Orchestra’s 2019 U.S. tour. He’ll play compositions by Beethoven and Chopin in this virtual concert.

March 4 via the Philharmonic Society of Orange County website.