“Arthur Beaumont: Art of the Sea” 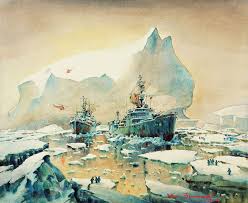 Beaumont spent his career capturing the accomplishments of the U.S. Navy on canvas. His
watercolors, some of which were published in National Geographic, depict the launch of the
USS Constitution, World War II battles, and expeditions to the North Pole. He also painted
specific vessels, including aircraft carriers and destroyers, and was named artist laureate of
the U.S. Fleet in 1958.

Opens Oct. 26 at the Bowers Museum.