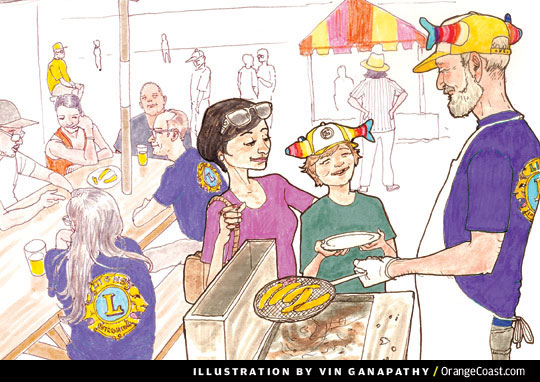 It takes serious longevity for an Orange County ritual to be considered an institution, but at 66 years old this month, the Costa Mesa-Newport Harbor Lions Club Fish Fry deserves the status.

Every year, on the weekend after Memorial Day, the $10-a-plate fundraiser provides what amounts to a reunion party for Costa Mesa. The park where the event traditionally takes place is called Lions Park, because the club and the money raised by  the fish fry helped build it. In the glory years, the Lions also put on a parade, with big-name grand marshals that included car dealer Cal Worthington and his “dog” Spot. There’s also a cute-baby contest that started, well, at least as far back as the 1950s.

But today, some of the Lions worry that the fish fry’s days are numbered. “We’re hurting for membership,” says 93-year-old Rollo McClellan Jr., who worked the club’s first fish fry—and hasn’t missed one since.

McClellan’s family goes way back in the area, his father having dredged and created the Balboa Yacht Basin, Linda Isle, and Harbor Island. In the 1920s when their Lions club was founded, it was one of the few social outlets around. Today, McClellan says, Costa Mesa-types just have “too many other things to do.” He tells younger people they should consider joining the club because “the friends you make in the Lions are your friends for life.”

Like other service clubs nationwide, the Lions’ mane is graying. The Newport Harbor chapter has lost about two-thirds of its membership; older Lions who’ve died have been hard to replace. Know anyone who joined the Lions lately? Didn’t think so.

Surely, I thought, this must be affecting the fish fry.

I sought out Mike Scheafer, a second-generation Lions president known as “The Codfather.” (I don’t make these things up.) Scheafer’s State Farm insurance office is lined with surfboards, model woody cars, and fish-fry memorabilia. He sits behind his desk and dons the club’s most coveted fish-fry souvenir: a faded, decades-old baseball cap skewered by a stuffed fabric fish.

“There really is a cohesiveness in this community,” he says. “The fish fry is part of that. It gets everybody together.”

I’ve heard this is one of the better fish frys, and when I ask him about the secret, he reaches into a file cabinet and takes out a manila folder. He shows it to me across the desk. Handwritten in faded ink on the tab: “Batter.”

Grinning, he flashes it open for about three seconds. “Only two members know the recipe,” he says. “There are two secret ingredients. But if I tell you what they are, dead Lions will come back to haunt me. They will.”

I don’t know why, but I believe him.

Scheafer says the fish fry has suffered several setbacks. In the 1990s, a lawsuit over a sprained ankle put the whole event out of commission for a few years.

The club nearly lost its long-time carnival operator last year. And the city also wanted to renovate the park, Scheafer says, so the Lions this year agreed to move the event to Fairview Park.

Fewer members means more work—and 59-year-old Scheafer tells his guys to set aside the whole weekend for the fish fry. He knows if he doesn’t get the chapter’s numbers back up, it and the fish fry will probably die.

Scheafer, who also is active at the club’s national level, has noticed that while U.S. Lions membership is dropping, other countries are experiencing a boom. In India, for example, Lions are building hospitals and other big projects, “something they can point to.” So he’s decided to try something new.

Scheafer believes young Americans are still drawn to the idea of service. “For this generation, service has to mean something to them,” he says. “It’s not a selfish thing that they want to see some benefits. They want to see a payoff, because they’re struggling themselves.”

Also hurting, he knows, are public school athletic and arts programs—and he sees a chance to offer that immediate reward to a younger generation of Lions. He persuaded Kirk Bauermeister, the 53-year-old principal at Estancia High School, to join. Bauermeister, in turn, started leaning on some of his coaches.

“When we get new teachers, we make them join,” says Bauermeister, and I get the feeling he’s only half-joking. In turn, school sports teams and booster clubs are allowed to set up fundraising booths at the fish fry, and are eligible for some of the donations the fish fry generates.

So far, the plan is working. The Costa Mesa-Newport Harbor Lions just received an award for being one of the fastest-growing clubs in its district; they’ve added six members this year.

I pass the county fairgrounds as I’m driving away from Scheafer’s office, and I remember how Costa Mesa residents put up with the traffic and hassle of the county fair every summer. But the fair isn’t really a community event; it draws visitors from all over, and the money goes right back into the fair. Other Orange County communities have great annual events, but so many of them—including the Garden Grove Strawberry Festival and the Orange Street Fair—have become sprawling SoCal invitationals.

The fish fry, on the other hand, is a homegrown ritual. All the proceeds help local charities such as the Boys and Girls Club, the Blind Children’s Learning Center, the Little League, Chamber of Commerce scholarships, and legions of other Costa Mesa causes. It’s also a place where people who have lived in and loved the city can come together once a year.

As the fish fry marks the 60th birthday of Costa Mesa this month, I hope the Lions’ new strategies will save the club. Not just for the charities, but for the city whose political and budget struggles in the last few years have left a lot of wounds. Beyond the city is a community—what this place was back in the 1920s when its Lions Club began. That’s worth remembering: Before there was a City of Costa Mesa, there were Lions. And their fish fry.

Try the Fry!
This year’s Costa Mesa-Newport Harbor Lions Club fish fry and carnival will be May 31 through June 2 at Fairview Park in Costa Mesa. cmnhlions.com