Beach Boulevard is an advertising assault, from billboards to bus wraps. Most people tell me they try to ignore it all, that each new pitch blurs into the next until they all become invisible. Just white noise. Yet I hope they never become invisible, because to me, everything about Beach Boulevard says one thing: I’m on my way home. You might think that an odd statement, but the familiar ribbon of blacktop is my lifeline; it’s my compass that assures me that I’m not lost. And in the days before GPS, I got lost a lot.

Even today, a slow crawl down Orange County’s 23 miles of Highway 39—Beach Boulevard—not only is a fascinating opportunity to catch up with what’s happening in the county, but a guarantee that I’m pointed in the right direction. Although sometimes, when luck’s on my side, resulting in my travel speed synchronizing with the traffic lights, it all flashes by too quickly to absorb. On these rare occasions I sail down Beach Boulevard—through Buena Park,  Anaheim, Stanton, Garden Grove, Westminster, Midway City to Huntington Beach—without ever stopping. This synchronized phenomenon is not an urban legend, and when it happens, it cuts my drive time by two-thirds.

But even when it doesn’t work that way and I’m stuck in stop-and-go traffic, it reminds me of my mother saying, “Honey, traffic jams happen because cars like to be with other cars.” It’s then that Beach Boulevard gets entertaining, and you never know what you’re going to see.

Beach and I have a long history. It has seen me through many stages of life. In childhood my mother and we
three kids would pile into the car and go to the Hi-way 39 Drive-In Theatre for nights of popcorn-filled double features with a two-cartoon intermission. In my early teens, I’d ride my bicycle up Beach for the daring nine-mile trek to Knott’s Berry Farm. My later teen years found me back at the Hi-way 39 Drive-In, which sadly is now a Walmart. It was there I had my first kiss and spent more than one date in a steamy-windowed Ford Falcon.

In young adulthood, Beach held an even more important place in my life. Once on Christmas Eve, when hurrying home from work to prepare for my family gathering, I got a flat tire. I limped along as far as I could, without ever seeing a gas station or repair shop. I finally pulled to the side of the road. In the days before cellphones, this was serious. Then a man pulled up behind me, jumped out of his car and said, “Do you have a spare?” In five minutes he changed the tire, wished me a Merry Christmas, and drove away, refusing the money offered. Who says there’s no such thing as Santa Claus?

Beach has even served as my source of comfort. For weeks after my first husband died, the drive from Buena Park
to my home in Huntington Beach had a way of putting a smile back on my face. I couldn’t help but grin when I’d pass the Super Yarn Mart next to the X-rated Studio Theatre in Buena Park. I’d see grandmothers in house dresses toddling in to buy yarn, passing middle-aged men in turned-up-collared overcoats and baseball caps, dashing to their cars after a matinee of “Blazing Zippers.” Who wouldn’t smile at that? Sometimes I’d take Beach all the way to PCH, where I’d sit in the sand by the water’s edge and contemplate the ocean; its vastness always made my problems seem small.

I once witnessed a man wearing a Jesus Saves sign, which in itself is not unusual, but he was also dragging a 12-foot wooden cross with a clamp-on roller skate attached to the end for easy transport. And awhile back, a man stood on the corner of Beach and Edinger and held up a different hand-lettered sign each week with a personalized message.
I remember one distinctly: Answer Your Mother. Have You No Respect? I always wondered if he was trying to reach a wayward child or if it was merely a generalized reminder for us all. A few weeks ago, I saw that a carport roof had collapsed onto a sedan parked in front of a storefront psychic palm reader, and I wondered why the psychic hadn’t seen this coming.

Once on the parkway in front of a small strip mall near Talbert, I saw a ghost bike memorial, one of those eerie white painted bicycles, sad reminders that a loved one died there. But a few days later on that same spot, oblivious to someone else’s pain, a realtor had stuck a sign behind it, just above the empty bicycle seat. It read: This Space Available. Proof that our founding fathers promised free speech, not sensitive speech.

Back in the days before GPS, when I ventured outside my safe proximity to Beach Boulevard, I’d get all turned around and sometimes spend an hour or more trying to get my bearings. Gas station attendant and postal-carrier directions only seemed to get me more confused. I mean, who can actually go down a mile, make a quick right at the Texaco station, then pass the second strawberry field and make a left at the third stoplight?

Being lost always causes a sweat-inducing, panicky-sick feeling in my stomach and makes my heart beat double time. But this is not my fault. My lack of an internal compass is inherited. It’s in my family’s genes, like pushed-in noses are on Persian cats. The only thing that calms my anxiety is locating my hub, my center axis: Beach Boulevard. From that familiar corridor, I can always find my way home.

These days, on any foray into Los Angeles, the deeper into the City of Angels I drive, the more ill at ease I feel. On my
way back on the 405, even with the confidence of GPS, I don’t really breathe normally until I spot the Beach Boulevard exit. And I don’t think I’m alone in this. We all have some trigger that makes us breathe easier, that elicits a relaxed sigh. It could be the sound of your teenager’s car pulling into your driveway after a late-night party, or it could be like mine: that big, green, welcoming Beach Boulevard sign that tells me I’m back on familiar ground, once again tethered to Orange County.

Beach deserves to be immortalized like Route 66 and Ventura highway. It pulses with the same magic energy as those musically famous thoroughfares. So, to any songwriters out there, please capture the tempo and rhythm of my
favorite strip of blacktop and put it to music. I’ll even give you the first line: “Beach Boulevard is my timeline, my lifeline, and my way back home. 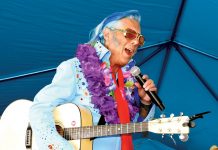 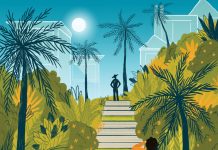