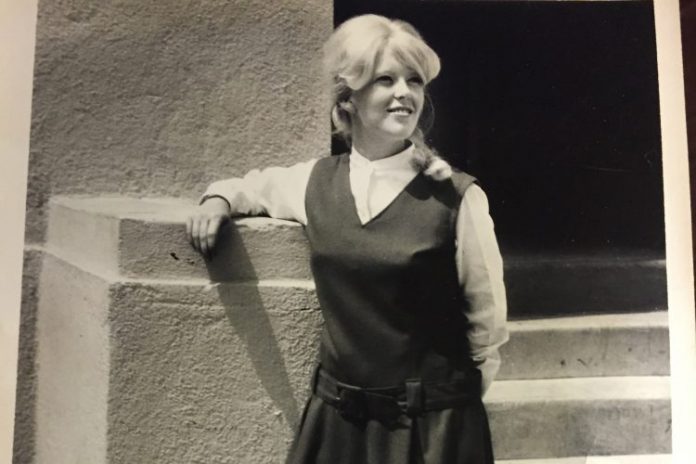 I pine for the days before Tinder when matchmaking was more tender, when I, a precocious 15-year-old, was one of the brains behind the Suzy Paris Lonely Hearts’ Club. My partner was my now-deceased father, Pat Hawley, a Hollywood character actor. He was frequently between parts, and during the lean months it fell to me to help support our family of seven when we lived in Garden Grove.

I called him Pat rather than Dad because we were equal partners, a well-oiled team. Among our successes: selling home beer bars; unloading used cars with new paint, re-grooved tires, and “adjusted” odometers; and our biggest hit, selling flashy polyester shirts we bought at the wholesale mart in L.A. to the braceros in the strawberry fields. This was 1962, the days when Orange County had more citrus trees than people, and our slightly flim-flam father-daughter act was colorful and forgivable.

We had our share of failures: a telephone answering machine big enough for Vincent Price to lurk inside, and sleep-teaching LPs for the phonograph, including “Beginning Spanish” and “Getting Started in Real Estate.” Pat was able to absorb this newfound knowledge, but across the hall, all I got out of that venture were bags under my eyes. Of course, I voted both these down.

The work was hard, but Pat would reward me by allowing me to come along on his casting calls, rehearsals, videotapings, and just dropping by to say hi to the celebrities he befriended at CBS, NBC, and Paramount Studios. As a curvy teenager with a long, platinum ponytail, I was Pat’s shtick, and stars such as Andy Williams, Bob Newhart, and Jonathan Winters loved to kibitz with us between takes. When Marlon Brando was in town making “One-Eyed Jacks,” Pat pulled him out of a shower to meet me. Dressed only in a towel, he sized me up and down and said, “Yeah, Pat, she’s a looker.” When Brando left, I asked Pat: “Do you think you could leave me here for an hour while I lose my virginity?”

Frank Sinatra gave my father his first job and a Screen Extras Guild card. Pat had trailed along after the Rat Pack night after night, and Sinatra finally got so tired of seeing him, he said, “OK, you big Irish galoot, if you can dance a soft shoe you’ve got a job on ‘The Frank Sinatra Show.’ Come to the El Capitan at noon Thursday.”

After that, Pat worked as an extra on “Playhouse 90” episodes directed by John Frankenheimer. What a thrill it was to sit way atop the bleachers eating peanut butter sandwiches while one of TV’s most brilliant craftsmen directed live-to-tape shows, often with hundreds of extras.

Pat’s next goal was to get a Screen Actors Guild card, and when he read in Variety that CBS was casting for a Western, “Rawhide,” we showed up so Pat could read. Another wannabe arrived, dressed in a fringe jacket and cowboy hat. He introduced himself as Clint Eastwood, and I whispered in Pat’s ear: “What a corny name! He’ll never get anywhere in Hollywood.”

After that, Pat’s career hit the skids and we had to come up with a new business. We brainstormed and decided that loneliness was a big draw. We hatched our lonely hearts’ club scheme at the kitchen table, naming it Suzy Paris to sound like Julie London, the sultry-voiced singer and actress. We took out a classified ad in the personals’ section of The Register: “Lonely tonight? Call the Suzy Paris Lonely Hearts’ Club, JEfferson 4-3580.” The phone rang off the hook as more than a hundred solitary souls clamored for an appointment with Suzy.

Pat and I immediately rented a nondescript storefront on the city’s main thoroughfare, Garden Grove Boulevard. Essential to our business plan was a fiberboard partition that Pat decorated with a huge mural of Sequoia trees. I was to peer at “the lonely” through a knothole while Pat interviewed the would-be members across from him. If Pat was successful, he collected a $50 initiation fee and the first month’s dues of $20. My job was to become familiar with each lonely heart so I could use our rotary phone to make hook-ups. I didn’t need Pat for this; he was across the street in the dimly lit Fire Rock Room enjoying his success.

I was at the desk every evening except Sundays, and for the first time ever Pat paid me—a staggering $100 a month. When on the phone as Suzy, I dropped my voice an octave: I was sophisticated, sexy, but most of all sympathetic. After a particularly great first date, it was usually the woman who called. “Oh Suzy! Thank you! He was such a gentleman! He’s taking me to Disneyland this weekend!”

But it wasn’t all hearts and flowers. I could have killed Pat for signing up the woman I recall as 250 pounds of Polish unhappiness. Finding a date for her was next to impossible. That’s why I matched her up with the humpback engineer. You should have heard them the next night on the phone.

RUBY Suzy! Do you realize you sent me a humpback? I was mortified when he schlepped into the restaurant!

SUZY But doesn’t he have a master’s in engineering?

The gentleman, used to rejection, called to let me know his date left before they were seated, and that she had the personality of a boa constrictor. “Be patient,” I told him. “I’m sure that by next month we’ll sign up a woman with a widow’s hump.”

The intensity of my persona took a toll on my real high school self. When a teacher called me out I wanted to scream: Do you know who I am? I was in love with Suzy—such a kind, good woman; a bit power mad, true, but willing to empretzel any two people from whom Pat had taken money.

My dear mother, Helen, who outlived Pat by 20 years, put the kibosh on my career, but the club lived on without me—the real Suzy who brought to the enterprise a higher consciousness. My father put another classified ad in The Register, this time in the business opportunities’ section: “Prosperous Lonely Hearts’ Club seeks partner. Expanding. Chance to get in on the ground floor. Unlimited potential. Call MAdison 6-9000.” Pat found a sucker with cash—$5,000—and he turned over all interest to the “partner” and buzzed up the 5 Freeway to Hollywood to sniff out a part that would get him a SAG card.

I grieved the passing of Suzy and carried on. I got a journalism scholarship to USC. The ensuing decades of my life have seen many zeniths and nadirs, but never, absolutely never, have I tasted the succulent wine of importance more than when I was a mere teenager who became a Wizard of Oz to the lonely from behind an unassuming Sequoia tree.