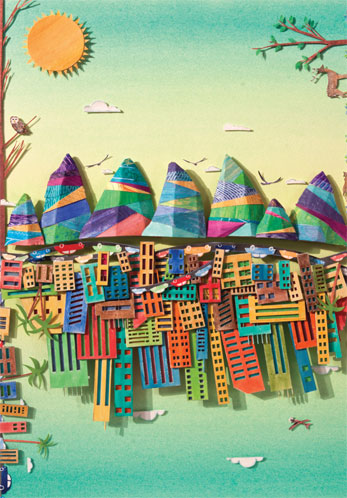 A little before midnight, our car slowed to a stop on a deserted and dimly lit street. The friend who was driving had promised us great late-night music to follow the play we’d just seen. I had no idea where we were, and wondered if I should be home in bed with a book instead of standing in front of a taqueria at midnight. Our friend directed us to an unmarked door, where  we were quickly motioned inside. We climbed a flight of narrow concrete stairs to a room where a beautiful dark-haired woman was waiting. She welcomed us, paused a beat, and then, with a flourish, pulled open the doors of what appeared to be a closet. Narnia-like, they opened to another world. We heard vibrant, percussive music as we passed through the wardrobe and then descended a spiral staircase to a secret place—a club packed with women in cocktail dresses and men in open-collared dress shirts dancing and mingling to a band playing Cuban music. It felt like a speakeasy from Prohibition, or a private club in pre-Castro Havana, a hidden world pulsing with life and energy unknown to everyone except those who knew how to find it.

This wasn’t the first time I’d had this kind of surprise. It reminded me of a discovery I’d had a few years earlier in one of Orange County’s secluded oak woodlands.

I was taking a naturalist class to become a volunteer trail guide for the Irvine Ranch Conservancy and it included a workshop in Fremont Canyon on animals and tracking, including scat.

I wasn’t that interested as I watched naturalist Kelley Reetz set out plastic models to show us how to identify the droppings of local wildlife. I didn’t see the connection between fitness hikes and bobcat poop. I was half-listening to what we could learn about an animal’s health and recent activities from its scat and tracks, when something she said grabbed my attention:

“Most of the time, this is the only evidence you will ever have of the wildlife on this land.”

These words connected with me; the forensics of scat and tracks were not really about poop and prints, but about the hidden world they reveal, much like the secret nightclub.

On a morning hike a few days later, I found some fresh scat in the middle of the trail. Before, it wouldn’t even have registered except to avoid it, but on this particular morning, remembering the naturalist’s words, I stopped to scan the quiet and seemingly deserted coastal sage scrub landscape around me. While I saw no other evidence, no movement or sound, I knew the creature that had marked its territory earlier was out there, hidden.

As I’ve learned more, I can connect a patch of prickly pear in Quail Hill to the unseen cactus wren that I know nests there, and a tall sycamore in Black Star Canyon to a deep and hidden water source. I know that a flattened patch of grass in the shade of an oak in Weir Canyon might mean a deer rested there moments before, and that the tracks I leave on a sunlit trail join those already left by creatures ranging from a solitary bobcat to a family of quail.

Tracks reveal more than species’ movements, but also how they connect to other life on shared land. The tracks of a single creature, including those left by me, are part of a larger, connected life story.

I volunteer on a fitness hike that begins underneath the 241 Toll Road, near the Irvine city line. Both the old ranch road we walk on and the toll road are evidence of the historical and massive scale of human tracks on this land.

While we gather before the hike, we can hear traffic roaring overhead, but as we begin to climb, that world falls away as we quickly and almost magically pass into another. This close connection between our developed world and the undeveloped one is a hallmark of this place. Most people recognize man-made landmarks such as the Spectrum or Disneyland’s Matterhorn that showcase one Orange County reality, but not a natural landmark such as The Sinks, a stunning sandstone formation that showcases another local reality just a few miles away.

Our county lies from mountain to sea on one of the most biologically rich landscapes on Earth. It’s prime real estate for humans and wildlife, with Wi-Fi-connected homes alongside open spaces and canyons that support communities of exceptional plant and animal life. Closely woven into and around one of the most densely populated counties in the nation is an unexpected wilderness that shapes my perception of life here. Seeing those natural signs gives me a view to a shared home that is dynamic, expansive, and even wondrous.

This is a good perspective to have of life in Orange County, and one as easy to access as the hidden club. The divide between the room at the top of the stairs and the nightlife behind the closet was not the distance, but the view. Once the doors were opened, it was easy to pass into another world.

The view from one of our many wilderness trails is just as close, and filled with signs that we share this land with other life that includes 3 million people traveling 279 miles of highways, as well as raptors nesting in Limestone Canyon and a rare small-flowered morning glory, recently discovered blooming on Loma Ridge. Even in a county such as ours, where a hundred languages are spoken in 34 cities, nesting and blooming are universally understood signs of life on the land.