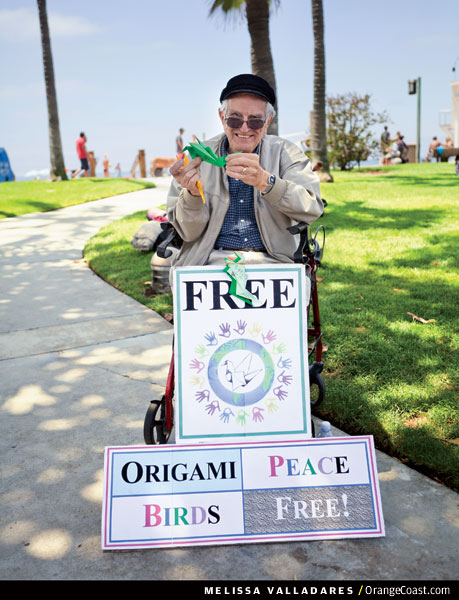 Around lunch hour on nearly any Saturday at Main Beach facing Coast Highway, you’ll find some of that happy handful of Americans who still stand on a soapbox in the public square, telling people what they think, mano a mano. Or mano a auto.

The Laguna Beach Peace Vigil is our own drive-up version of Speakers’ Corner in London’s Hyde Park, minus the haranguing. Here, few actually give speeches; they hold signs and speak to passersby, and the whole thing is breathtakingly polite. And at 45 years old, it’s the second-oldest peace vigil in the nation, one year junior to a Quaker-founded group in Bellingham, Wash.

The local vigil was started in 1968 by well-known activist Jeanie Bernstein to protest the Vietnam War. Arguably, Bernstein was most effective when she helped form the anti-nuclear group Alliance for Survival. But the woman was a force, already getting up there in years when she chained herself to a bulldozer to protest the toll road in Laguna Canyon. Seldom without a wheelchair in her later years, Bernstein continued to show up for the vigil until two years ago, when she died of congestive heart failure at 88.

Sometimes only a few people come to participate during the 11 a.m.-to-1 p.m. vigil. But hot-button issues draw larger crowds. The 2003 invasion of Iraq, for example, brought out about 150 people holding up a lengthy American flag-style banner. There was another swell during the Occupy movement.

But lately fewer people have attended. Some of the originals have died, says Chris Casegrillo of Laguna Beach, a former Marine lieutenant colonel with 20 years of reserve duty, who along with his wife, Lee, a Vietnam War-era vet, are regulars because they want people to think more clearly about war.

“We do it here to provoke a focus beyond ‘Isn’t the beach lovely and can I get my mocha-ccino now?’ ” he says. “Dying and going to combat—that’s not a spectator sport. You’re not cheering for the Lakers. People need to ask themselves, ‘If it were my kid, would I want to be sending him off to war?’ ”

On a summer Saturday, I stood with five protesters. “Stood” isn’t the right word because most of them sit in folding beach chairs, slathered with sunblock, their faces shaded by wide-brimmed hats. This is a laid-back Orange County nonprotest protest. They stay legal by obeying the rules about staying on the park’s grass, and not blocking pedestrian traffic on the sidewalk.

The vigil-goers sometimes hear obscenities from passing cars; I’m told things get more negative during presidential election years. The group has never turned anyone away, though at times protesters with opposing views have piggybacked on their space. Recently when Ron Paul supporters showed up, vigil regulars opted to coexist with their libertarian brethren. One veteran shrugged and told me: “At least we’re both taking up the peace cause.”

People with strong convictions tend to find one another. As a result, the vigil has forged lifelong friendships. Rob Talbert, a 54-year-old Laguna Beach holistic health practitioner, discussed Syrian strategy with Pat Cohee, an 80-year-old veteran from Aliso Viejo. Talbert said the vigil is like a “very bright, very intelligent” discussion group for him. Over the years Cohee has become his “mentor.” As they spoke, a Turkish tour bus operator walked by and asked why they weren’t protesting the situation in Turkey. They told the man to make a sign and join them.

I asked Casegrillo why he doesn’t simply share his opinion online from the comfort of the beach house he rents. “For all the intimacy of Twitter and Tumblr and blah-blah-blah, a lot of it is baloney,” he says. “It doesn’t truly make people feel connected.” The vast majority of Americans have tuned out on the issues, he says. “We don’t seem to have the attention span necessary to drill down on anything. We’re like flies at a picnic.”

I’m glad the Laguna protesters are promoting their opinions in such a personal way. Sometimes I wonder if the anonymity of the Internet has revealed some terrible, base cruelty in us all.

At those times, it helps to go back to personal contact, to a ritual such as the Laguna Beach Peace Vigil, quaint and limited as it is, just to affirm that people who don’t agree can get along just fine.