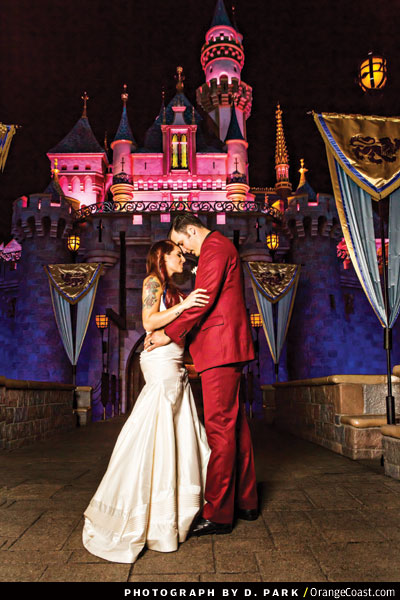 I’m no Mouse hater. We’ve made lifelong memories at Disneyland and bought annual passes before the prices got outtasight for a family of five.

But holding a wedding amid the crowds, noise, carnival smells, bloated characters, and wailing kids at the Happiest Place on Earth? I mean, really, bridezillas, we’re talking an amusement park here.

Turns out, there’s a whole club of Disney brides out there who feel quite differently.

After Mariah Carey renewed her vows at the park a little more than a year ago, I delved into it. I discovered some women dream from girlhood of a magical wedding at the Magic Kingdom. Traditionalists rent the Cinderella carriage and the castle. Others hire a few specific costumed characters as “guests” or choose a location that highlights Disney history. A Disney bride can spend years planning the big day—they tend to be detail-oriented—and some even prepare PowerPoint presentations to ensure no element is overlooked.

They started finding one another a few years ago via social media, because they couldn’t get enough wedding information through official outlets. Today, what began with a small knot of strangers helping navigate their big day has become a social group for life. Disney brides take trips together, host baby showers, make regular excursions to the theme park, and attend new Disney weddings. They have formed an unsanctioned club, and nothing underscores the depth of Disneyland’s impact on life here more than those couples who choose the Anaheim locale as the place to take one of the most serious vows of their lives.

I find five of them sitting in the bar at the Disneyland Hotel after they’ve just put in a tiring afternoon at the park. They’re wearing giant mouse ears, which are in the various hues of their matrimonial color schemes.

“Why did you want to get married here?” I ask, and I’m relieved when they laugh. They’ve heard the question before, including from relatives.

“Lots of people like to get snarky when they hear about Disney weddings,” says Becca Sianez of Anaheim, at left with husband Mike. “They think of kids screaming in the park and Mickey Mouse as the officiant. But weddings at Disneyland actually can be very elegant.”

The 25-year-old Sianez, who married at Aladdin’s Oasis, claims hers was the first official Disney wedding at Adventureland. She says there is a special intimacy to getting married after-hours, when the park is closed. Her guests watched screen shots from films at her reception at the Animation Academy, and for favors, Sianez had each guest’s name written in chocolate on what looks like a cast member nametag.

The brides tell me a Disney wedding generally costs between $20,000 and $40,000 (the average U.S. wedding costs about $27,000), although the tab can reach $500,000, which Sianez says was the price tag on Mariah Carey’s vows renewal. The ceremony was widely reported to cost $135,000, but she and husband Nick Cannon also treated their guests to a number of rides, opened only for them, and the couple stayed in the Dream Suite, a 2,200-square-foot luxury apartment in New Orleans Square. Carey arrived in Cinderella’s carriage, dressed in a fluffy white princess gown, and Cannon dressed as a prince.

Before I met the local Disney brides, I assumed most must be Cinderella-fantasy types. But their motivations turn out to be more complicated. Sianez, for example, worked at the park, and her Trabuco Hills High School sweetheart, Mike, still does. They arranged a Disneyland date the 16th of every month, so it seemed natural to get married there last Sept. 16. More importantly, Disneyland always has been a place of security for Sianez. “I’ve had an annual pass since I was 5, when my parents got divorced. It was our happy time together. I’d be angry and upset, and we’d come over here, and I’d be happy.”

She mentions something I’ve heard before among pass-holding locals. Disneyland is like a community to them. It’s a neighborhood park. A night at the movies. “Some days I’ll just eat a churro and people watch,” says Sianez. “Other days I’ll ride every ride.”

For others, such as 34-year-old Mindy Marzec, of Burbank, the idea of a Disneyland wedding was imprinted early. She recalls looking down from the monorail as a child and seeing a bride and groom at the Disneyland Hotel. From then on, she dreamed of getting married at the park.Twenty-nine-year-old Nerissa Rivera-Laux of Anaheim, whose reception was attended by Mickey and Minnie, wears nail art of Disney scenes, one depicting  the “backside of water.” (Jungle Cruise buffs will get the joke.) Thirty-two-year-old Wendy Allen of Tustin lives in an apartment decorated with Disney memorabilia. “Disney is who we are,” she says.

We who live here have a special relationship with Disneyland. Love it or hate it (and yes, Disneyland sometimes seems that polarizing), it’s where so many local traditions play out. By virtue of being in our neighborhood, the park has become a part of many family traditions. Sometimes you’ll find those rituals in small moments; other times they’re hard to ignore.

I live within percussive range of the Disneyland fireworks, and that means all three of my kids at some point became obsessed with not just hearing those fireworks on weekends, holidays, and nightly during the summer, but seeing them. For a few years, we used our pass just to see the fireworks. When our son was 2, we rode the train so often that the engineers got to know us. And one hot, pregnant summer, we loved dining in the cool underground candlelight and musk of the Blue Bayou.

I know we’re not alone.

Photograph by D. Park
This article originally appeared in the June 2014 issue.