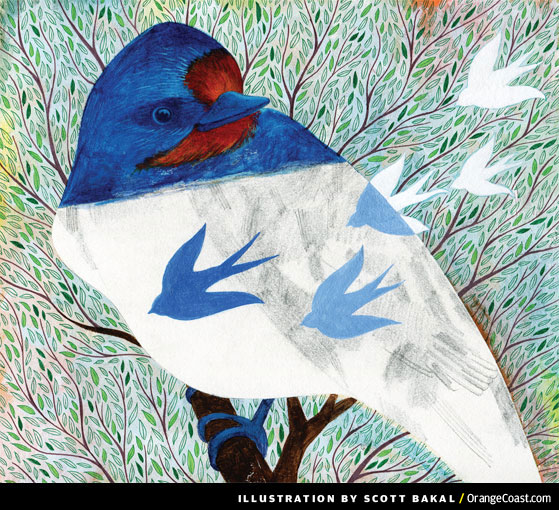 There was no predicting the return of the swallows to the Mission San Juan Capistrano. But there they were—a pair, doing what amounted to a flyover, and on Swallows Day no less.

It was a pleasant enough coincidence that the installation of Pope Francis took place last year the morning of March 19—the feast of St. Joseph—also known as Swallows Day, when the birds traditionally returned to their legendary
Orange County home. But no one expected what happened just after the bells started tolling to celebrate the new pope. After years—some say decades—of snubbing the mission, a pair of swallows came flying through the courtyard.

“All of us started cheering,” says Mechelle Lawrence-Adams, the mission’s executive director who was among the first to spot the birds. “Those swallows were like the scouts. People were clapping and crying.”

Recordings of other swallows were placed throughout the mission grounds to woo the birds back. And Walter Piper of Chapman University, working with renowned swallows expert Charles Brown of Oklahoma’s University of Tulsa, confirmed the pair-in-residence in June. They found a nest just outside a priest’s rectory window.

I’ll admit I was among the dubious. Others have tried in vain, and with millions of tourist dollars riding on their return, some attempts have seemed almost comical.
I remember groundskeepers making little mud puddles in the courtyard, trying, I guess, to encourage the birds to make their little earthen nests. Another time they tried building ceramic nests, like little prefab homes. In the bird world, Brown says, that’s about all they have to work with: the nests and the calls. It’s not even clear if the birdcalls—not mating calls but ordinary greetings—actually worked, because the nest was found in a different location from where the recordings had been placed.

Although the swallows had been gone from the mission for quite some time, lately they’d been seen in a secluded area of Oso Creek, and in a housing complex across the street from the mission.

Still, a lot of people, especially tourists, weren’t even aware that the swallows had fled. Experts have offered a number of explanations over the years for why the birds don’t return to the mission. Many say it was the earthquake retrofit of the 1990s, when nests had to be removed. The swallows’ disappearance remained an unguarded secret for years, and locals certainly weren’t eager to advertise that the county’s living icon was now pretty much a myth. As far as many visitors knew, the birds were still returning, just as they had since the earthquake of 1812, which created a nesting site in the ruins of The Great Stone Church. Traditions this old don’t die easily.

But the swallows’ failure to return to the mission already was an issue when I lived along San Juan Creek in the early 1980s. Many of them had relocated a few miles west along the creek. I was upset with my homeowners association for placing owl decoys on our buildings to scare them away. These are the famed swallows of Capistrano, I pointed out to my neighbor, an association board member. They’re an international symbol of the renewal of spring.

That went over about as big as the illegal primroses I’d planted, violating the CC&Rs. The owls stayed, and I was quietly delighted when the swallows dive-bombed them with white droppings, transforming them from scary decoys to plaster of Paris statues.

I visit the mission a few times a year, and I often see tourists looking for the swallows in the eaves and buying up swallows trinkets in the nearby gift shops. Last year’s sighting was incredible news to the local tourist industry.

But ornithologists aren’t celebrating just yet.

Lawrence-Adams tells me she fears the birds are disappearing “like the World War II generation,” and Brown says they’ve “lost the tradition” of returning to the mission. The only way to get them back, he adds, is if large numbers start following last year’s happy pair. Brown says there might be only about a thousand swallows left in all of Orange County, and doesn’t sound even cautiously optimistic.

“In parts of Southern California, the bird has been declining more rapidly than any other part of the U.S.,” he says. “You have bigger factors going on here. This illustrates the decline of a lot of birds as a result of landscape change over the last 50 to 75 years. That’s the lesson to be learned: We lose things when we change the landscape. When we put in invasive plants like eucalyptus, even an iconic species like the swallows of Capistrano can be affected.”

Sadly, one of our oldest rituals eventually may be honored in name only, which leaves Swallows Day fans with a difficult question: Do we continue to celebrate the return of the swallows when the swallows are not, in fact, returning?

Still, I think about the two birds that came back last year just in time for the parade, and about their new nest just outside a priest’s window. And I think: A whole new world can start with one returning pair.

See It!
The 56th annual Swallows Day Parade will begin at 11 a.m. March 22. The organizer, the San Juan Capistrano Fiesta Association, claims it’s the largest nonmotorized parade in the country.

Illustration by Scott Bakal
This article originally appeared in the March 2014 issue.