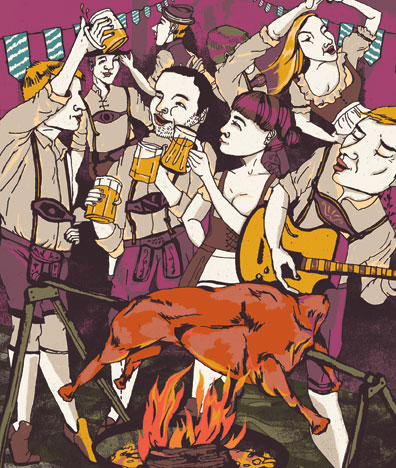 Anaheim’s Phoenix Club was founded in 1960 to preserve German culture, and for half a century its members have celebrated the autumn harvest by roasting an ox on a spit and basting it with good German beer, all night long. This takes place on each of the busiest Saturday nights of Oktoberfest. People start lining up Sunday morning to savor the succulent roast, and there’s seldom anything left by mid-afternoon.

But there’s also a ritual within the ritual that’s even more of an insider tradition. For the Phoenix Club Oktoberfest, the Saturday night ox barbecue is accompanied by all-night music and revelry, starting with something called The Serenading of the Ox. The serenade begins when the ox is put on the spit about 10 or 11 p.m. Revelers dance toward the spit in a kind of conga line, and the giant alpenhorns blow. (Because she’s proficient with the instrument, this year’s Oktoberfest Queen, chosen without a contest from among the Phoenix Club family, will be blowing the alpenhorn.)

The last time I checked, nobody in Germany actually serenades anybody, and nobody there loads an ox onto the barbie. (I went to Munich, and they cooked their oxen in big high-tech ovens). But club members tell me this has always been a special Orange County version of the ritual, doing Oktoberfest with a spit-roasted ox and a serenade with a German oompah band. As long-time butcher and ox-handler Willi Mattern says of the local celebration: “It’s all mixed up.”

Joe Spaziano, a 41-year-old second-generation Phoenix Club member who loves to grill, sometimes gets into barbecue-stud tales with his neighbors. He tells them: “You say you like to barbecue on the grill, but how many of you can say you cooked a 350-pound ox over a spit?” (And never mind that here in Western beef country they actually use a steer, not an ox. There’s a difference, but darned if I can tell, and the dictionary isn’t much help.)

The computer consultant from Orange remembers how magical it was to be a child celebrating the Oktoberfest ox: the firelight, the Bavarian dancers who sometimes frolicked all night long, the card players who shuffled their decks past dawn, the German band that once played till the sun rose. Many of the club members were young parents who’d circle their campers to spend the night to help cook.

In recent years, as the old Germans in the club have died or grown too tired to sit up all night with the ox, Spaziano has spent much of the night alone with no companionship but his laptop. He has kept the animal from burning, prevented it from undercooking inside, and repaired the spit when it failed.

But that may be about to change.

No one can quite put their finger on the reason, but a new generation of not-necessarily-German twentysomethings has mixed in with the many families who make Oktoberfest an annual rite. They’re learning to sing the German songs, and they’re the ones who stay up the latest, replacing the old-timers who head home to bed. In doing so, they’ve discovered The Serenading of the Ox.

Unlike other local Oktoberfests, which attract “Costume City thigh-high tights and the little ruffled skirts,” these young people are spending the time and money to dress authentically, says Heidi Klopsch Davis, another second-generation Phoenix club member in her 40s. She meets me over charred bratwurst and sauerkraut at the club’s public restaurant, tucked behind the Honda Center off Ball Road.

She says 11 percent of Orange County residents are of German descent (that may sound high, but compare it to parts of the Midwest at nearly half), and that Germans represent the second-largest ethnic group in Orange County. Anaheim was settled in the mid-1800s by German musician-farmers (the city’s welcome sign still says “Willkommen”), and by another wave of postwar engineers a century later. Plenty of young German-Americans discover their German heritage at Oktoberfest.

“We want them to learn how to party like a German,” she says.

But most who sing to the fatted calf these days have no ties to the homeland. “They’re not German, they just want it to be an authentic experience,” says Spaziano.

I think in the word “authentic” may be a kernel of what is attracting the newer crowd. In Orange County, we’re all seeking more of that lately.

So, about the serenading. This is where it gets a little weird. There are no cheat sheets for the German songs sung to the ox, but many of the young guests have memorized the lyrics, especially the words of the most traditional song (at least in Orange County), which begins:

Anton, Anton, Anton … (“Anton” is repeated 15 times; this is the part most serenaders can for sure remember.)

I’m so handsome, I’m so great, I’m Anton from Tirol.

My mega-lean calves drive the girls crazy, my build is a wonder of nature.

I asked if there’s actually an Anton, because if there is, I feel it’s my duty to meet him. But no one associated with this tradition has ever met Anton, nor are they sure why they’re singing about his calves. I asked if the ox was named Anton, and the question was met with raised eyebrows. (The use of the word “mega,” however, suggests a recent translation.)

There is, sadly, no official source to consult about the origin of the name Anton in this particular context. The closest I found is 71-year-old Mattern, owner of Mattern’s Sausage & Meats in Orange. (The brats are so good, there are lines during holidays.) He remembers the first time they cooked the ox was in the ’60s. Although he wasn’t involved yet in the ritual, he gave them the standard hours-to-pounds cooking scale. They cooked the steer for two days, but it turned out sour. After that, he says he got “sucked in” to being hands-on with the roasting, and he’s done it ever since. He loves the moment they light the fire: “It’s the height of the Oktoberfest. And you can almost feel the vibrations of the crowd.”

Anton? Mattern has no clue. (I later learned the lyrics were penned by an Austrian disc jockey.)

Orange County has changed at warp speed. In our lifetimes, we’ve seen it transform from rural to urban. Gone in our lifetimes are the beach bluff picnic spots, the long strawberry plains, the horse trails, the orange groves. But The Serenading of the Ox endures. The tradition that most of us never heard of has been around for half a century. I think we should all show up this year and sing the song about Anton with the mega-lean calves, and dance around the fire, if for no other reason than to celebrate that we still can.

This article originally appeared in the September 2013 issue. – See more at: http://www.orangecoast.com/dining/reviews/2013/08/28/main-course-wineworks-for-everyone#sthash.jJp0vwT8.dpuf