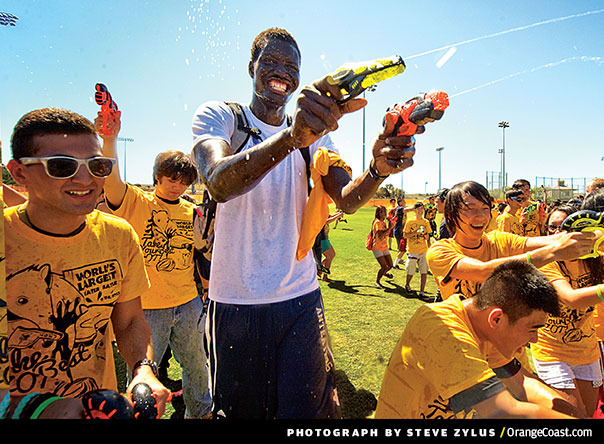 Maybe it’s because UC Irvine has that strange-looking anteater for a mascot, or because its backyard is the cool, calm city of Irvine. Yet over-the-top school spirit (as in, say, USC Trojan style) has rarely been the hallmark of the county’s UC campus.

But for the past few years, its students have set out to change that once-sleepy culture big time. What started as a fun way to welcome incoming freshmen—a massive, record-setting dodgeball fight in 2010—has become an annual schoolwide tradition, complete with intercollegiate rivalries, large-scale logistics, a Guinness World Record judge, a community service component, and the constant pressure to one-up themselves year after year.

This month, the university’s enterprising students will set out to capture their fifth Guinness World Record in a row.

In its first couple decades, UC Irvine basically was a cluster of buildings surrounded by cow pastures. Thomas Parham, class of 1976 and now vice chancellor for student affairs, recalls the only amenities as a pizza joint and a convenience store. But the university has grown—so much that I sometimes wonder if I’ve made a wrong turn. UC Irvine now boasts students from just about every nation. It’s celebrating its 50th anniversary this year, and in June, President Barack Obama delivered the school’s commencement address at Anaheim Stadium.

A lot of people still think of the university as a commuter school. But this fall, nearly half the 28,000 students will live on campus (compared, Parham says, with a national average of about one-third), and administrators and student activities coordinators have worked diligently to make sure they also feel they belong to a community.

Sam Shaw, who graduated in 2013 with a degree in international affairs, came up with the world record idea in 2010. The Mission Viejo native, a sales coordinator for ITV independent television in London, once recounted his efforts to start a Guinness World Record tradition in a talk for TEDxUCIrvine; he recalled that he set up websites (no one visited), looked for sponsors (no one helped), and asked his fellow students to log in and sign up (few did). Shaw chalked it up to a lack of spirit.

“Maybe the very fact that the campus lacks spirit is the reason this should happen,” he said. It took him months of hard work and rejection by students before he worked up the nerve to ask the university to buy into the idea. It did, and Shaw prevailed. He believes the result has been a huge injection of school spirit that he hopes will last.

This year, the torch passed to the new vice president of student services, Josh Nguyen. The 21-year-old Fountain Valley native says a ton of work goes into every world record attempt. Students’ ideas have to be vetted at several levels—with university administration, the fire department, and others—and organizers have to find the money to pull it off. Hiring a Guinness judge alone sets students back $10,000. The cost of 6,000 water blasters to stage 2013’s water pistol fight was $12,000.

Plus, many ideas simply don’t fly. The world’s biggest ice cream party? Too expensive. Chapman University and others lay claim to annual large-scale undie runs, and at press time organizers were debating whether the cleanup would be too difficult if they staged the world’s largest water balloon fight. Nguyen floated a new idea this fall: a color festival in which students would fling powdered paint (corn starch and food coloring) in school colors—blue and yellow—at one another. But this idea, patterned after the ancient Hindu Holi festival, was rejected to respect that it’s also a religious event in India.

And then there’s the matter of numbers. Can organizers pull together enough students to set a record? That requires the students to remain in place, sometimes for hours, until the Guinness judge certifies the count. Nguyen says he has heard about counts lowered to subrecord levels because so many participants left the scene once the stunt was over.

Nothing lasts forever, and last year’s triumph simply becomes someone else’s challenge. The 2010 UC Irvine dodgeball record was quickly bested by the University of Alberta. The Anteaters came back in 2011 and set a new record, but the Canadian university broke it again. The Anteaters regrouped in 2012 to set a record that still stands: 6,084 dodgeballers.

Last year, students decided to break the record for the world’s largest water blaster fight, an honor held by the residents of Valladolid, Spain, who managed to get 2,671 people to engage in a water-weapons battle in 2007. The Anteaters succeeded, staging an epic clash among 3,875 wet—or at least damp—participants.

That record also holds, so the students this year have set their sights on the record for the largest pillow fight. It’s hard to say whether they will succeed. But some students tell me this annual Orange County ritual already has achieved something entirely unexpected: It has become a UC Irvine recruiting tool.

Photograph by Steve Zylius
This article originally appeared in the September 2014 issue.