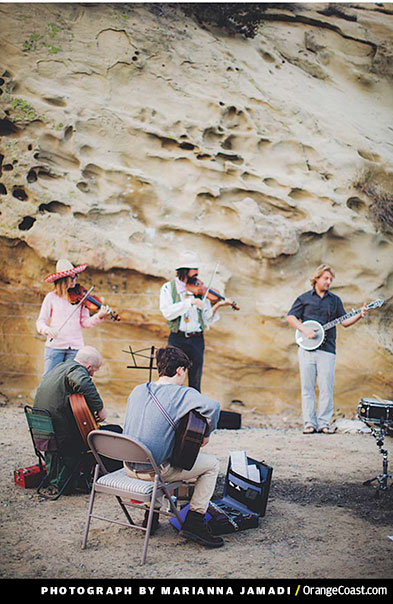 Flatlanders like me sometimes forget that mountains are part of this county, even though every day they flank us on the east and often lure me up their trails.

Then one hot Friday afternoon, I stumble exhausted out the Black Star Canyon trailhead and hear the sound of fiddling. And I remember there aren’t just mountains here; there are mountain people, too. I’m inclined to expect magic.

Where the trail starts and the parking
lot ends, musicians assemble their instruments. The setting sun casts a violet glow on the limestone bluff above us. The white, pocked cliff gives the space the feeling of an amphitheater. Raptors float overhead.

In the dust of the road’s wide shoulder, two fiddlers tune up. The young man’s long brown hair tumbles from a worn felt-brimmed hat, and the young woman’s blond tresses flow from under a sombrero. A flutist unpacks and assembles. A guitarist unfolds a portable stool. A man takes up the harmonica and starts playing alone.

“It’s totally unpredictable who’s going to show up,” says the man with the fiddle.

He’s 36-year-old naturalist Joel Robinson, bearded, barefoot, and clearly one who believes that, for sustainability reasons, one should wear clothing until it falls apart. Robinson grew up amid chickens and orange groves in a small neighborhood in Orange, at least until the land was sold for commercial development. (A 24 Hour Fitness stands there now.) When he and wife Leslie had their daughter, Sydney, now 10, they searched for a place similar to one in his old neighborhood, ultimately finding a remote canyon cabin five years ago in the Santa Ana Mountains.

To call his mountain music jam a “group” suggests membership, but the musicians change every outing. Robinson got the ritual going in Limestone Canyon in 2002, and he’s the only original musician still playing. But now the jam is a local mountain tradition. The music, too, is mountain music, so ancient and folksy that a 19th century Silverado Canyon miner, waking up in some long-lost shaft, still would recognize some of the tunes.

I’ve known Robinson for a few years. We don’t live near each other, but he’s one of those people I keep bumping into, which gives this sprawling county of 3 million a small-town feeling to me. I see him at the grocery, and he’s barefoot. A man walks past in a crowded theater, and my son says he “smells like nature,” and naturally it’s Robinson, still barefoot, which makes me think he gets special dispensation on the shoe issue because he looks like a holy man. I’ve gone on his natural history walks, the best natural learning experiences around. From among the programs he offers at naturalist-for-you.org, you can learn how to make flour out of acorns, build a willow tent, and survive off the land.

Other musicians arrive, and the group starts improvising. It’s immediately clear that everyone is a good player, even if their instruments suggest otherwise. What stuns me is how truly guitarlike a battered gas can guitar can sound, especially when played with a slide.

The jam takes place twice a month from 6 to 8 p.m., and often beyond. On the last Friday of the month, the musicians meet at the end of Blackstar Canyon Road, an offshoot of Silverado Canyon. On the second Saturday of the month, they gather first at the Silverado General Store parking lot, where they’re given directions to Robinson’s cabin.

Like most true jam bands, members play for the joy of playing. Jason Farthing of Aliso Viejo, a 42-year-old records administrator for the county Department of Education, says he jams at least a few times a year with this group, even though all his free time already revolves around music. Farthing spends his after-hours crafting guitars out of found objects—primarily cigar boxes (an art that started in the 1840s) and gas cans. His guitars and cigar-box guitar kits have sold all over the world. He and 68-year-old harmonica player Jesse Boden also play together in The Budrows, a band that uses Farthing’s found-object instruments.

“This is such a cool setting for musicians to come together,” Farthing says. “I like meeting new people all the time.”

The other fiddler is one of the new people. Allie Meyer of Newport Beach, a 32-year-old software consultant, is a classically trained violinist who once lived in the Blue Ridge Mountains of South Carolina. She missed hearing and playing mountain music and found this jam on the Web. But not everyone who participates has so deep a musical background. Robinson’s jam welcomes all musicians, even oatmeal-box drummers.

Another half dozen musicians dribble in, and I listen with delight as they work through “Turkey in the Straw,” “Dueling Banjos,” and “Cabbage Head.” I’d planned to stay only for a few songs, but they’re just too good. I wish I’d brought a chair, because there’s nowhere to sit for this free concert in the middle of one of the most beautiful pieces of wilderness in our county. Except for the players, I’m the only one here.

On my way out, I see four guys in lawn chairs tailgating out of an SUV. They’re high school teachers who schedule their weekly mountain bike ride around the jam. They tell me they’re the only regular audience.

“You don’t feel like you’re in Orange County, that’s for sure,” says Dave Alewine, who teaches algebra and phys ed at Mission Viejo High School.

Or maybe we do. Maybe there’s a little mountain music playing in each one of us in this county, and we just have to cock an ear eastward to hear it.

Hear Them!
To play or just listen, call 714-649-9084, or email jrobinson@naturalist-for-you.org. Event details at naturalist-for-you.org/calendar.htm. Arrive at least 15 minutes before start time, and bring your instruments and a chair. If you want to play, tell them you’re coming, and they’ll send you a list of the music so you can prepare. To hear The Budrows, visit thebudrows.com/blog.

Photograph by Marianna Jamadi
This article originally appeared in the August 2014 issue.