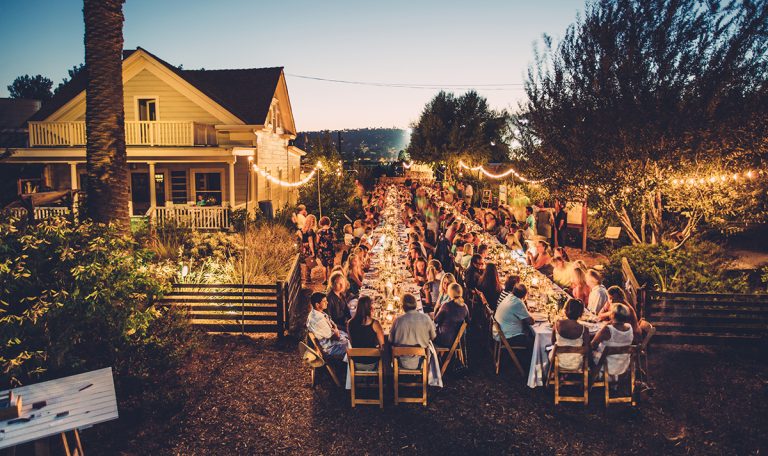 I used to live near a strawberry farm in San Juan Capistrano, and sometimes when I’m making jam I still go down there to get organic berries. This summer near the stand, I noticed a white, two-story farmhouse with a tangle of native plants flowering out front. I’m sure I must’ve seen it before—I’ve driven down Alipaz Street off and on for years—and yet this was the first time I actually saw the house.

There was a forgiveness about the old place, which enlightened San Juan Capistrano taxpayers decided to help preserve. Most of it had been scoured and planted as a drought-tolerant yard, but there also were a few straggler Hollyhocks—real English garden beauties, the rich deep burgundy of theater velvet. It charmed me that someone had decided to let those water-loving flowers fight it out in the drought.

A sign identified the building as the home of The Ecology Center, an educational nonprofit situated in an 1878 farmhouse once owned by Pony Express rider Joel Congdon.
I’ve heard a lot about the center from my foodie friends. For seven years, it has hosted an outdoor farm dinner in September, prepared by the finest chefs in the county. Called Green Feast, this fresh, locally sourced meal, a fundraiser for the center, sells out soon after tickets go on sale in July. More than 200 diners sit at white-clothed communal tables hundreds of feet long. The backdrop is the farmhouse. Surrounded by acres of loamy fertile fields along a manmade creek, lighted by soy candles and scented by sage scrub, the feast is one of the county’s most breathtaking philanthropic events.

At the end of the porch I found a gift shop. My kids and I were buying a jar of strawberry lavender jam (jam makers are always checking out others’ preserves) when we ran into the founder and executive director, Evan Marks. The 34-year-old has curly, shoulder-length hair and was wearing rolled-up jeans, a gray baseball cap, and a navy T-shirt from Hurley, one of the center’s many corporate sponsors. Marks has a knack for attracting big-time sponsors. Boeing is on board, and so is Chipotle. Some of them, including Kia, heard about the center (and the dinner) and actually contacted him.

Growing up in Newport Beach, Marks became interested in environmental issues as a teenager, about the same time he began surfing. Disgusted by the garbage along his shoreline, he started to pick it up, piece by piece. Then he got involved in water testing, which in 2002 led him to a degree in agroecology from UC Santa Cruz, which he calls “the Harvard of organic agriculture.” After school, he formed an independent consulting company that took him to Costa Rica, Ghana, Nigeria, Mexico, and Peru to build organic farms and to offer sustainable solutions for water and energy. While in Africa, he had an epiphany: Maybe his environmental solutions were needed in Orange County?

“Let’s be honest,” he says. “Our consumption level in Orange County is out of control. But we also have the ability and the heart to be the leaders for change.”

The annual Green Feast dinner is a chance for some of those leaders to come together. The main rule is that all of the meal’s ingredients must be from within 250 miles. This presents culinary challenges. For example, there’s no sugar cane growing within 250 miles, so the predominant sweetener at the feast is honey.

My kids and I strolled the grounds, which include a small solar-run farmyard, with chickens and raised gardens. We found simple answers for the drought and energy independence—solar systems, rain barrels, reclaimed water, composting. I pointed out that some of these solutions were probably employed a century and a half ago, when this farm began.

It’s not often we think about our past in Orange County, or even think we have one. But it’s here, in places such as this old Pony Express rider’s house. It’s here in pockets all over the county, and it’s in our own backyards.

We do often think technology is the answer, and in some ways it is. It’s already providing solutions to droughts of both water and fossil fuels.

But Green Feast is important, too. It’s a way, as Marks says, to use the past as inspiration for the future. It reminds us there’s another way to sustainability by showing us the simple workings of a small farm. For one night, we dial back our pace to a time when we were more in touch with the natural world. It reminds us why fresh, locally harvested food tastes better than we remember—if we’re old enough to remember it at all.

Click here for information on Green Feast 2015, on September 12.