Darkness clamps down quickly on the 4-million-year-old sandstone canyon, and by the time we’re only a short way up the west side of the Loma Ridge, we plunge into night, the rising moon still tucked well below the mountains. The full-moon hike in Limestone Canyon had been on my bucket list for a while. But the hike was nearly always full—so popular a ritual that the Irvine Ranch Conservancy now offers several full-moon hikes in different locations throughout the year. The available spaces on the reservation list fill up about as fast as they’re posted. This spring I get lucky and snag a spot.

As we hike up the modest incline, our volunteer hiking leader Ross Gough, an engineer, tells us we might see mule deer and hear coyotes. But the clouds are moving in and—here he seems sweetly apologetic— he can’t guarantee we’ll see the moon on the full-moon hike.

Limestone Canyon only became accessible to the public in 1993, and then just on a few guided tours. Until then, this huge swath of land had a forbidden quality to it; the rare person who’d trespassed into its folds returned with mythical tales of a five-mile oak grove, as well as stunning cliffs, including the Sinks, Orange County’s Grand Canyon.

Didn’t know we had a grand canyon?

This points to the problem facing the stewards of Orange County’s last swatches of wilderness: how to get the 3 million people who live in the dense communities
edging the open space to connect with it. Or simply to know it’s there.

For decades, wilderness lovers have fought developers in Orange County over some of our most beautiful and biologically important wildlife areas. But the battle for the big pieces is over. We’ve reached the point where the large tracts of wilderness that might be acquired for open space are gone. When executive director of the Irvine Ranch Conservancy Michael O’Connell tells me this, my heart sinks.

But O’Connell, who has been with the conservancy since its founding in 2005, then tallies how much has been saved: 60,000 acres of non-federal open space in Orange County and an equal amount of wild federal land.

Orange County had an advantage, he says, because The Irvine Company and Rancho Mission Viejo Company owned the largest shares of the wild land. By contrast, in San Diego, 20,000 landowners possessed critical habitats, which makes management difficult.

“We have world-class natural land here in Orange County,” he says. “We’re in an area that’s considered a hot spot of biological diversity on the globe.”

O’Connell’s expertise is habitat restoration. That’s a good thing, because the major part of the conservancy’s job is not planning its 2,000 wilderness activities (including the full-moon hikes) each year, but managing the land, which includes restoration, wildlife monitoring, destruction of invasive species, and fire abatement. O’Connell calls Limestone Canyon—a preserve about the size of Griffith Park—the county’s “crown jewel.”

Yet only a sliver of the population has seen it, partially, in my opinion, because it’s so difficult to access. This is meant to protect sensitive habitat. The public can access the trails only one day a month, besides the organized hikes.

At least 20 of us are marching up Hicks Haul Road, located behind a locked gate just past where Jeffrey Road runs out. I walk beside two hiking buddies from Irvine.

“We’re hikers, and we’re full-mooners,” says Mary Lloyd, a middle school administrator who’s trying to complete all the full-moon hikes the conservancy offers. She had just finished the Bommer Canyon full-moon hike and called it “rigorous” and “a little surreal.”

We enter a no-talking area—a nesting spot for the red-tailed hawk—and we walk for 10 minutes in silence, the stars suddenly brighter and the sage scrub more pungent. I look back to see the car lights on the Foothill Corridor toll road stitching along the horizon. So often in what we call wilderness in O.C., houses or freeways are visible. For me, the sight of development on a hike breaks the fourth wall.

This hike finally leaves the toll road for a while, and Gough points behind us where the hidden moon is brightly outlining the entire Loma Ridge. In the darkness it looks like a ragged EKG line. We stop, and Gough tells us all about the creation of the moon and points out constellations. As we turn to trek back, the full moon finally bursts over the ridgeline.

The hike isn’t quite what I’d imagined; in my head I saw full moonlight illuminating a white Grand Canyon. In actuality, the big canyon is still miles ahead of us, and the moon is behind the cliffs, not shining on them. Orange County glitters far below—millions of lights, millions of people—and we are up here alone with all this wild land and what feels like our own private moon. But I still feel a thousand miles from civilization, and it’s exhilarating to know it’s always here, and always will be.

Take a hike!
For more information about full-moon hikes and other wilderness activities in Orange County, see letsgooutside.org. And stay tuned for our October cover package about hiking the county’s wildest places. 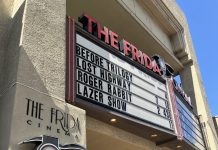 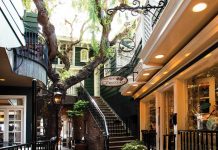