The truly cool won’t just go to Coachella this month. They’ll get invited to one of the exclusive parties that encircle the big music festival.
Dozens of small events beckon the boho class to the desert at the end of April, but one of the real ragers is Vestal Village, a sprawling, three-day, invitation-only campout and all-night barn dance hosted by Vestal, a Costa Mesa-based watch company now venturing into eyewear and apparel.

Unfortunately, Vestal Village is in a secret location with security guards, the numbers are limited to about a thousand, and the guest list, in its sixth year, is beginning to calcify. It’s nearly impossible to crash. But people do figure it out. After all, Vestal’s president Johnny Gehris and marketing VP Derek Boucher are locals. And this is Orange County, land of the friend-of-a-friend.

The fete would make the three Workaholics of Comedy Central fairly weep with envy: the under-40 set at play, careening along giant makeshift Slip ’N Slides; bungee jumping—horizontally—into blow-up pools; doubling up in sleeping bags in brightly painted tepees and 30-person military tents tricked out in jungle chic and RVs that look like rolling bars; dancing to live music at 3 a.m.; and quaffing free cocktails. Nobody has to drive anywhere. Free shuttles provided.

But mainly it’s about music. All the Hula-Hoops and flamingo decor and moonshine and Burning Man encampments and face painting? Just the sideshow. The music can be so great at Vestal Village that many guests never make it to the Coachella festival itself. Long-time guest Mark Clausen ticks off his favorite acts that have played at the encampment: Robert DeLong, Nick Waterhouse, Magic Wands, and LA Riots. “Vestal Village is this self-regulating microcosm of Orange County beautiful people mixed with eccentric others—CEOs, professionals, artists, musicians, models, surfers, and snowboarders—all living the same experience for 72 hours,” says Clausen, chief financial officer of Mammoth Mountain ski area. “Doesn’t matter your position or background, you’re all in it together. Self-regulating in that pretty much anything goes.” The village started because of the recession. Music lovers all, the Vestal execs and their friends usually rented a house in the desert during the festival and threw a party for about 50 guests. But a party wasn’t in the budget in 2008. They were thinking about calling the whole thing off when somebody saw an ad for renting a campsite.

Vestal now rents 50 desert acres that are bicycling distance, about four miles, from the Coachella festival. The space includes a grassy patch in the sand, a pond (no swimming, though that rule allegedly has been challenged in the wee hours), horses (no riding, another regulation I’m told has been flouted in the middle of the night), a swimming pool (one guest tells me the water darkens as the days progress), and shuttles that run between the festival and the camp.

“First a friend broke his shoulder, and he was casual about it. He was cool,” the 34-year-old Shaw says. “But then in midair, a girl’s top came off, and that’s the clip that made it onto MTV. She was cool about it, too, but Vestal was like, ‘OK, we’re retiring the bungee. That’s enough fun.’ ”

Many guests decorate their RVs or tents. The site offers portable toilets and showers, but there are no hook-ups, unless you’re talking about those other kind. Of which there are many. Costa Mesa hairstylist Lauren Snowdon, who grew up in Newport Beach and was childhood friends with the Vestal founders, describes how she impressed an Australian tourist at Coachella by getting him into the exclusive Vestal Village party.

“It was the first time I spent with Jai—literally,” the 28-year-old says with a giggle, rocking their newborn son, Miller. The couple married and opened Pie-Not, an Australian savory pie shop on 17th Street in Costa Mesa, after meeting at Vestal.

They have become known as the King and Queen of Vestal Village. As we’re talking at the shop, a friendly, tattooed, bearded 31-year-old in an Australian felt hat comes out of the kitchen to greet us. Jai’s favorite image from Vestal: coming back to his tent after a round of partying one windy night and finding it collapsed on a friend. Everybody was concerned, but the friend was fine, sleeping face down, his arm around a woman.

Many satellite Coachella parties serve commercial purposes, and Vestal is unabashedly in it for the marketing pop. Vestal’s Boucher says the party replaces the old-dude round-of-golf with an event that not only pleases younger clients, but is guaranteed to get social media play. Marketing a new fashion line is not about cramming thousands of people into an event, he says. It’s more effective to invite a smaller number of people with bigger platforms, in modern marketspeak. In Boucher’s words: “High-profile people with 100,000 followers. That’s 100,000 impressions.” Nicole Hanriot, a 29-year-old Foothill High alum who runs the beach and festival clothing line Beach Riot, says it’s a genius way to market. “There are bloggers who come by, and when they’re posting photos, they tag Vestal Village.”

Smart people might disagree about the epicenter of cool in Orange County, but I place it fairly close to the coast, geographically, and squarely in the action sport/surfwear industry, style-wise. Vestal Village offers a glimpse at how our homegrown style is influencing the world, and how much fun its creators are having while doing it. 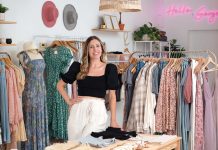