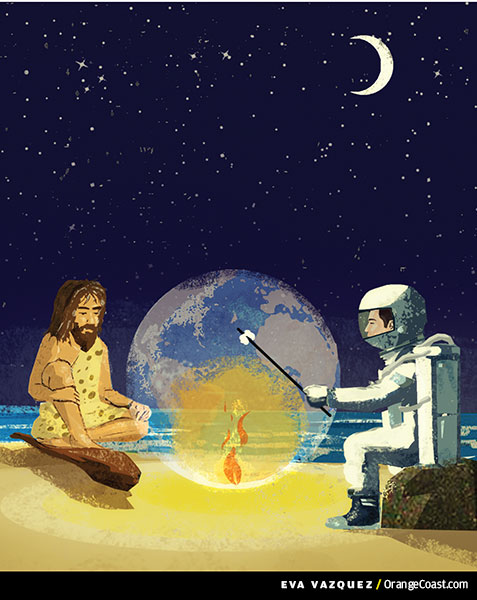 The ritual of gathering friends and family around a fire is probably as old as fire itself, and here along the coast, we saw how deep the roots of that tradition go when that fire was about to be taken away.

The Newport Beach City Council voted last year to remove its beach fire rings, and we campfire lovers suspected that the city was being elitist, exploiting the air quality issue as a cynical (and green!) way to dis-
courage the platoons of inlanders who descend on its pristine beaches for summer-night campfires.

The issue quickly became a coastal one, and thousands rallied to defend the fire pits. In the end, the fires stayed, but with a few more restrictions to help improve air quality. I think Newport won in a way, too, because the city, it turns out, isn’t nearly as exclusionary as its reputation.

In a local survey taken last summer that didn’t get much attention, 89 percent of those polled said they didn’t want the fire rings removed, and when asked about residents who complain about traffic and smoke, 86 percent said it was a “trade-off for living on the oceanfront.” Coastal residents overwhelmingly defend the tradition over their own needs for privacy, solitude, and even clean air.

Granted, the survey was funded by a pro-beach-fire PAC, and here I’m stunned into silence by the idea that a campfire can have its own political action committee. But Orange-based Lewis Consulting Group is a respected public affairs and polling firm, and President John Lewis tells me that except for the typical 4 percent margin of error, the 500 registered Orange County voters whose opinions are reflected in the survey represent a fair sampling of the city.

But even if the poll was skewed, we need only look to other coastal communities to see how people feel. The issue seemed to revive the don’t-tread-on-me spirit that we’re so famous for in this county. In Huntington Beach, hundreds turned out at public hearings to support the campfires. San Clemente and Dana Point also said to leave their fire rings alone.

One of the more interesting sidelights of the debate—a game-changer, I think—was when Howard and Roberta Ahmanson joined the battle. The Ahmansons—heirs to a savings-and-loan fortune—live in a gorgeous home directly above one of the biggest clusters of fire pits in the county. They live on the same Corona del Mar property where his grandfather once lived, and there were beach campfires in his grandfather’s youth, too. Ahmanson can’t remember a time when there weren’t beach fire pits.

The couple say they used to host parties for friends around campfires on the beach, and it’s a tradition they want to keep. They draped their home with a giant “Save the Fire Rings” banner. They hung a petition from their gate, and also threw some money into the campaign. (They won’t say how much, except that they are major supporters of Friends of the Fire Rings, which helped fund the survey.)

“It’s a public beach. It belongs to all the people,” Roberta Ahmanson says.

She calls the rings a “critical gathering place” for family and friends: “The experience of sitting around a fire to roast marshmallows with chocolate or hot dogs, singing songs, and telling stories is an old and irreplaceable human tradition. We have no idea how far back it goes.”

As for health concerns, she says, “The fire rings are used to their maximum in summer, and then mostly on weekends and holidays. I watch the Newport Beach asthma alerts, and they’re usually at zero. So the fires can’t be causing a big problem for people who have serious health issues.”

My own family uses fire rings at least a few times a year. We get three or four guitars going. It’s a primal experience—the flames snapping and white caps crashing on the sand, and songs we have sung so often they sound like chants.

After Newport Beach raised the issue, the decision about beach smoke fell to the South Coast Air Quality Management District, where my husband, Miguel Pulido, is a board member. Like me, he’s pro campfire. He promised he’d be open-minded, and after analyzing the data and chairing a public hearing attended by hundreds and talking with government officials on both sides of the issue, he voted to save the campfires. He lost, 7-6, but he was able to help craft a compromise that spreads the rings out and diversifies fuels to bring down pollution levels.

Meanwhile, the California Coastal Commission got involved. In the eyes of that agency, campfires give people access to the beach who otherwise might not use it. The issue finally reached the Legislature, which passed a measure in January that protects all fire rings. As I write this, the Coastal Commission supports the bill that’s awaiting the governor’s signature.

Which decision will trump which? The thought of it makes my head spin.

Newport Beach still has the same number of fire rings, as does the rest of Orange County. The city’s ban on wood fires was supposed to start at the beginning of March, but enforcement was delayed until after March 20 to give the Persian community a chance to celebrate its time-honored New Year’s tradition in which celebrants leap over a campfire to purge themselves of mistakes from the previous year and start fresh.

Next year, the Persians will have to jump over big chunks of charcoal, because the Newport ordinance levies a $100 fine on people who burn wood. City Manager Dave Kiff tells me that people keep showing up with car trunks full of wood to burn, and the city gives them a warning, along with a free bag of big-chunk charcoal. The charcoal produces a wood campfire flame, but has lower emissions. Howard Ahmanson says the giant charcoal cubes might be a good compromise, and I agree.

Watching this battle over the last few years, I’m surprised by how the issue brings together bluff-top billionaires, immigrant families, and even German tourists at the Hilton in Huntington Beach hauling little red wagons filled with s’mores ingredients to the beach because they can’t do that in Germany. From the retirees at Doheny cooking canned beans over a campfire, to my daughter, Isabel, who recently attended three bonfire parties in a single weekend, we love our beach fires.

It only strengthens the ritual that we’re willing to fight for it—and, yes, to share it. It says something else about us, too, something more than the desire for another burned marshmallow. It says we’ve reached a certain maturity as a culture.

Illustration by Eva Vazquez
This article originally appeared in the July 2014 issue.