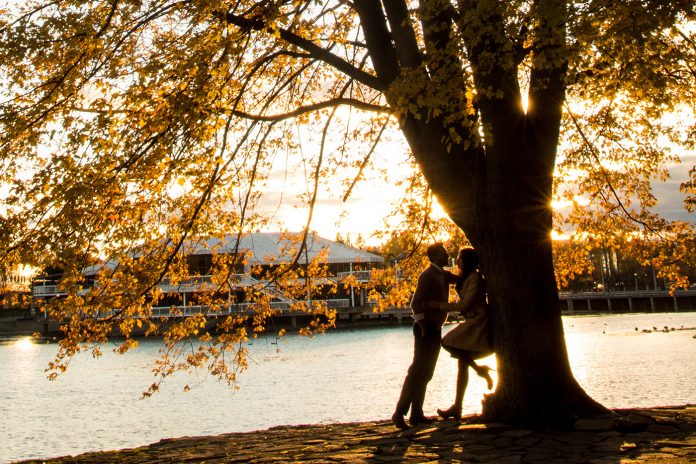 “So I’m hooking up two friends for winter formal,” I overhear one teenager report to another. “They both really like each other, but they haven’t exactly met. So how do I have this not be awkward? Do I go, like, ‘Friend, meet other friend. Fun fact about this guy—’?”

Fun fact: It’s romance season again in Orange County. Winter break ends, and, February or not, it might as well be spring. Dances, valentines, courtships, corsages. Strategy sessions with lunch table yentas. Even people who don’t shamelessly eavesdrop on their teenagers can see it. The signs have been around for weeks—not metaphorical signs, real signs. On cardboard and banners, on buildings and overpasses. On the hoods of cars at the high school. On water polo balls thrown over the pool deck at the object of affection. In pieces of sushi, in pepperoni on pizza, in icing on cupcakes . . .

I love this time of year here, and not just because it lets me imagine a more satisfying version of my own grisly adolescence. (What if my handsome husband had magically been around then to find me in spite of my glasses and braces and assorted deformities?) No, I also love it because Orange County is so kid-centric, and kids are romantic. And the stars in their eyes remind me that romance can be anywhere we want it, even in a place ordinarily preoccupied with family.

Say what you will about Orange County’s many fine attributes—and they are legion—but it’s easy to forget how many of us ended up here among the good schools and tract houses because someone once swept us off our feet. Fun fact: A lot of us were hot once. (OK, maybe just to each other.) But Californians don’t associate O.C. with hotness. Desire isn’t clean, temperate, livable, educated, and well-ordered. Who dreams of locking eyes across an office park at lunch hour? Who’s lookin’ for love in a gated subdivison? French restaurants in malls do not equal Paris by moonlight, and with all due respect to Disneyphiles, Sleeping Beauty’s castle is crawling with children.

Never mind the hearts-and-flowers hard sell that accompanies this season. That’s about buying stuff (a different kind of Orange County passion). And never mind that Irvine once was named the nation’s fourth-most-romantic city. That was an Amazon.com listing based on the number of romance novels people bought there, and, no offense Irvine, but even you laughed.

No, O.C. was built for us, the people who these days just read about heaving bosoms, typically between carpool duty and Chuck E. Cheese parties. And yet it, too, can offer romance—you just have to know where to look. Some see it in Silverado Canyon, where hikers hold hands under sun-dappled boughs. Or on boats bound for Santa Catalina Island, their sails white against the blue Pacific. Or in coves you can only reach at low tide on the scalloped Laguna Beach coastline.

And it’s a good thing they do, because it’s easy to miss it. Life is long; work is hard. After a certain age, the facts aren’t as much fun as when you were young and awkward. The bills and logistics, the lists and obligations, the minivans strewn with stray homework and Happy Meal wrappers—they crowd out the way your heart once beat at the mere presence of that special someone. You wake up one Valentine’s Day and there you are with a screaming kid at some restaurant that hands out crayons with the menus, and all you can think is: This is not the way we were.

So we do what we must. Me, I spy on my teenagers and their pals because they remind me of certain priceless commodities:

Here’s how it feels when you know someone you’ve just met is going to be special. Here’s how you look when you’re so thrilled that it’s awkward. Here’s how you open your heart so wide that a 10-foot-tall sign won’t contain it.