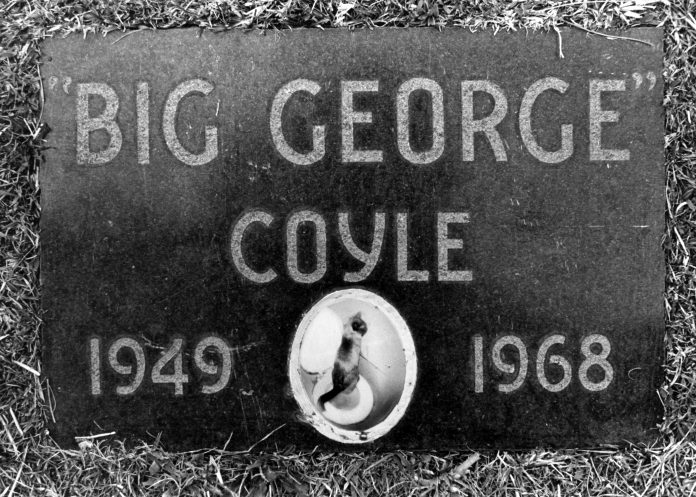 The photo of Big George Coyle’s remarkable headstone was buried deep in the archive at First American Financial Corp. in Santa Ana. I had been browsing for something else when I came across a trove of 1972 images by photographer Henry C. Koerper. He’d photographed a number of the gravesites at the Sea Breeze Pet Cemetery in Huntington Beach, including a joint plot shared by a skunk named Pew and a chipmunk named Dale.

Delighted to discover that Sea Breeze was still in business, I contacted Brenda Pulley, the cemetery’s president, to arrange a visit. Why? To be honest, it called to mind Evelyn Waugh’s wonderful evocation of a pet cemetery called the Happier Hunting Ground in his 1948 novel “The Loved One.” I also was inspired by “Gates of Heaven,” a 1978 documentary film about pet cemeteries by a then-unknown Errol Morris, his first. (Roger Ebert: “I have seen this film perhaps 30 times, and am still not anywhere near the bottom of it: All I know is, it’s about a lot more than pet cemeteries.”)

I wanted to visit Sea Breeze myself.

The 3½ acres along Beach Boulevard are a relic hemmed in by commercial clutter, including mattress and tire stores, a Walgreens, a Carl’s Jr., a Coldwell Banker office building, and a hulking, new three-story Hoag Health Center. The cemetery first welcomed the public in 1961, back when Beach was one of the county’s most significant traffic arteries and this was a relatively quiet lot just a couple miles off the coast. The perpetual invitation to enter comes from an understated blue sign.

The first question that strikes me as I steer into the driveway is: “How many other businesses in Orange County have stayed essentially unchanged for more than half a century?”
The second: “Where among the approximately 35,000 occupied plots might I find Big George’s headstone?”—the one that includes a photo-etching of the well-trained cat squatting self-consciously on a white porcelain toilet?

Overshadowing those questions, though, is the simple fact that such a place still exists in modern Orange County. It’s damned rare to find something original here, something besides the mountains that hasn’t been eroded by our relentless impulse to grow, change, and evolve. Sea Breeze has been offering funeral services for pets since the Kennedy Administration, and that strikes me as significant.

Here’s a time-worn place to which tens of thousands of local families have turned while grieving the death of an animal they adored. They’ve paid serious money for the privilege of interring their companions in these small, well-tended plots. Some have sprung for the roomy whole-body real estate, sold in 3- and 4-foot-wide parcels excavated to 45 inches deep to accommodate three and sometimes four stacked caskets. Others have opted for cremation and often burial at the bottom of a square-foot-sized, 35-inch-deep shaft that offers stacking space for up to eight containers.

In Orange County’s vast and ever-changing landscape, the graves and markers at Sea Breeze are existential anchors. Our pets will die. We will die. Eventually, our descendants will die or move away. But right here, sunk into this earth, are these little attempts at immortality, permanent remembrances of so many Stinkys and Goofys and Crackers; so many Scooters and Fluffers and Porkys onto which we’ve projected ourselves and everything we hold dear. Many of the Sea Breeze headstones include not just our surnames, but the religious iconography of our respective faiths, including the cross that marks the plot shared by Ralf and Charlie Sullivan, and little Cupcake Rosenfeld’s poignant Star of David.

The proprietors of Sea Breeze acknowledge the possibility of change. “Oh, they sent someone over to talk about buying the property,” says Pulley, nodding over her shoulder at the gleaming Hoag Health Center next door. “But they wanted us to relocate the pets, which would have meant notifying all the owners. They left and never came back.”

But isn’t change inevitable, especially in ever-developing Orange County? Of course it is. But I also was relieved to hear that the proprietors of Sea Breeze have a plan.

I conveyed to Pulley my rough calculations based on figures she supplied: With between 1,500 and 2,000 plots left, mostly in what now is the front lawn, and at the current rate of about five new burials per month, I guessed that Sea Breeze has only about 25 years before it runs out of these teeny pieces of prime commercial real estate. Wouldn’t those 3½ acres then stop producing revenue? Wouldn’t it then be smart to sell it to someone looking to develop Sea Breeze into something with a brighter revenue-producing future?

Pulley shakes her head. “We can still bury in existing plots,” she says. “And we’ll still do cremations. Sea Breeze lives off cremations, thank God.”

Pulley says she has no specific plans to sell the property, and even if she does, the new owner would have to jump through a lot of hoops—including public hearings—to use it as anything but a pet cemetery. Considering the fresh flowers, balloons, pinwheels, and chew toys regularly left on Sea Breeze gravesites, you can almost hear the cries of an outraged citizenry.

Besides, the buyer might want to think long and hard about changing anything, since selling pet gravesites and all that goes with it can be lucrative. Pulley downplays this—“It’s a good business, not a great business.”—but the numbers are intriguing. Casket-plot combos go for between $775 and $935, depending on size. Cremations cost $80 for cats, and $150 for a Lab-sized dog. And of course, there’s still money to be made selling the $120 extra-large metal urns; $105 “exotic wood” ones; the satin-lined caskets like the ones on the wall display just inside the front door that sell for between $120 and $250; and stone grave markers that go for $275 to $850, the most expensive being the heartbreakers with a photo engraving.

That’s good news, too, for Sea Breeze employees who have worked there for decades. Benjamin Gonzalez, the cremator, has been on the payroll for 42 years. Miguel Cerda, who builds the caskets, about the same length of time. His son, Antonio, has worked here since 2000, tending the grounds. Clem Beld, the 84-year-old driver who picks up deceased pets, has worked for Sea Breeze for nearly 20 years, as has Lisa Stadler, who handles the office with Pulley.

At least for now, no one at Sea Breeze is much worried about job security.

Asked to help locate the plot of Big George Coyle, Pulley retrieves an ancient record from her computer system, prints it out, and leads me along the main path to Section 5, Row 18, Plot 5, in the back right sector of the cemetery. Big George, it turns out, is buried in the cats-only section. “The cat people didn’t want any dogs allowed,” says Pulley. “They don’t like dogs.”

Time and weather have worn away the fine details of the etching on his headstone. The porcelain they used back then broke or wore away with age, leaving the marker with an undistinguishable photo. “Kind of sad,” Pulley says.

Lost, too, are the details of Big George’s remarkable toilet training. I hungered for more from the Sea Breeze records, but at this point I can conclude only two things from the available information: The Studio City phone number for his owner, Elsa Coyle, no longer is in service, and Big George was 19 years old when he passed.

As remarkable as that is, even 19 years reminds me that we’re all just blips in time. I wonder where Elsa is now. I wonder if she had children or grandchildren who remember her remarkable cat, and if eventually his headstone will be the only evidence that there once was a Big George Coyle. I wonder, too, if I’ll be the last person to ever visit Sea Breeze with him in mind. With his family dispersed and his headstone eroded, who’s left to marvel at a cat that pooped like a proper gentleman?