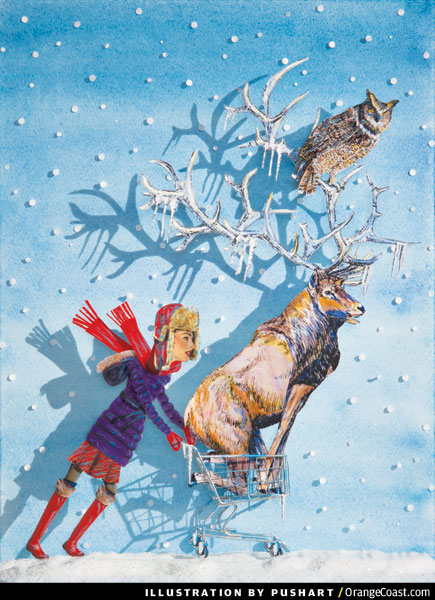 This month I will break through the ice of my seventh Montana winter and confess that, although I embraced adventure and traded Orange County’s lifestyle to retire here, today I would gladly dance cheek-to-cheek with a grizzly for a redo. I want my 80-degrees-in-May back.

Ho-hum, fires still crackle on the hearth. Yeah, yeah, I hear the elk bugling. Another great-horned owl? Who gives a hoot? I’d rather hearken to the foghorn. I’d much rather be surfing, but my only option is the Internet, where I seek (since my fingers thawed) any O.C. real estate I can afford.

Yesterday I caught the unmistakable cry of a seagull that evidently had taken the same wrong turn. I snapped my neck skyward. “I know where you’re coming from,” I empathized with this other old bird, which also knew that sometimes the road less traveled is that way for a reason.

I thought I was disillusioned. Born and raised in a native SoCal family, I believed my 90-year-old father when he said that everything was going to hell because he couldn’t drive anywhere anymore without running into something. Turns out, hell is pushing the grocery cart over thick slush that should be pavement by this time of year. And no Trader Joe’s.

I said I was tired of traffic. What I wouldn’t give now to sit serenely still at the Y, where a potential fender bender involves bumpers, not antlers. I could be inching along, tires gripping terra firma instead of bobsledding down the driveway. This morning I put it in neutral and prayed the sludge rut was a straight line. To think I thought the Matterhorn was a wild ride.

I swore dining out wasn’t a priority. Who needs ocean-view restaurants when you can hunker down in your own kitchen for months on end? Dining anywhere on PCH is No. 2 on my revised bucket list; first place is a striped towel on Laguna’s Main Beach.

“Won’t you miss Southern California?” friends asked when I announced my headfirst plunge into the northwest territories. I replied, “I’ll love the seasons!” And I did.  Invigorated during the first few years, I hiked through fall foliage, snowshoed across winter wonderland, and bundled in trendy cowls until summer. Colder but wiser now, I long to return to Corona del Mar where on Mother’s Day ample coverage involves something sleeveless and a visor.

Nobody mentioned aging. When caught in winter wind-chill that “feels like minus 17” I close my eyes and imagine my brittle bones soothed by a balmy Santa Ana. Ask me how well that’s working.

The other day, after unzipping the down parka that’s still a morning wardrobe essential, I hopped on the Rainbow Sandals website to try to remind myself what a strap looks like between my toes. Eight pairs in assorted colors remain somewhere in my closet, a vestige of a former life where I took vitamin D for granted. In daydreams I saunter down Balboa Island’s South Bayfront and slap, slap, slap across the wooden ramp to the island ferry. When I wake up, I take small consolation in snubbing my lily-white nose at the dermatologist. Meantime, the week Montana locals call spring is just around the corner—in June.

It isn’t just about the weather. Even after the frostbitten landscape melts and makes the pastures verdant, and the gray skies become Montana’s famous big blue one, I’m hopelessly homesick. I pine for sandy bedsheets and clean cars.

I planned to cheer for the local sports teams. In summer it’s an easy 20-minute drive into Missoula, where Osprey fans flood the baseball park. But I’m not feeling it. I have so much orange in my blood that instead I’m wearing Mike Trout’s number with more pride than his mother, driving eight hours, and traversing three mountain passes to watch the Angels play the Mariners. If I bump into someone who also hails from Orange County, my skin tingles, my stomach seizes, and my need to establish authentic ancestry is suddenly more vital than to act my age: “I’m a third generation!” I wildly interrupt.

I recently met someone who’d relocated from Newport Beach to Las Vegas. “We’ve decided to move back,” she chirped, and I nearly spit my coffee at her. Living in the desert meant “we can’t go outside for a big chunk of the year.” Tell me about it.

“Our Vegas neighbors think we’re crazy,” she continued, “but if you have a heart for Orange County, you understand.”

I get it; I left mine beating somewhere in San Juan Capistrano.

“Maybe it’s about getting older,” I tell my husband. “Maybe I just need to feel my feet on the right ground.” Then I set aside the bear spray and click my ruby red boots three times.

I recently Skyped with relatives in Irvine. When the camera blinked on, blinding sunshine blazed through their windows like celestial rays announcing the arrival of some character from “Lord of the Rings.” “Look at the light!” I said, shrieking like an infant. “Those colors!” I squealed and squinted, like a mole rising from a hole to a blast of bougainvillea.

Sympathetic souls suggest I should visit Orange County more often, as if small sips could quench my thirst. I followed that advice once, and the mere whiff of eucalyptus triggered such a crying jag that I was forced to feign an allergy attack and seek counseling. At the airport I patted John Wayne’s bronze knee as if I were reuniting with my deceased Grandfather Clary.

Oh, to wrap my palms around the steering wheel of something small and sporty! I’ll abandon the tractor I thought was sexy, forgo the snowplow, and advertise for sale a shed full of survival items I can’t identify. I’m ready to buy a return ticket and reclaim as my birthright the sun-kissed patch of paradise I simply know as home.

Illustration by Pushart
This article originally appeared in the May 2014 issue.