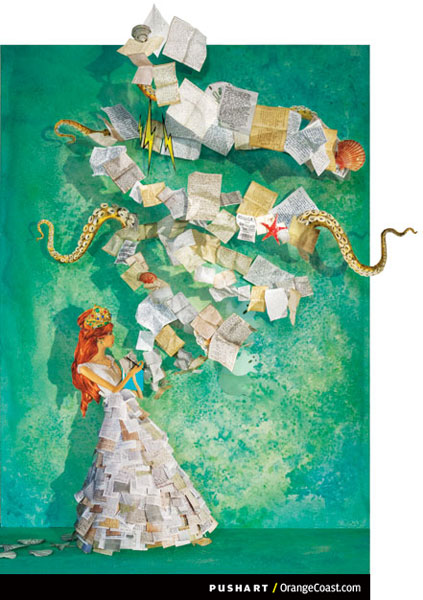 I have an email from the Queen of Atlantis.

At least, that’s what I call her. Her name is Lisa, and she runs our Tuesday night writers group. I call her the Queen because she’s descended from the royal family of Atlantis, so she says, something she’s researched extensively and often talks about. She looks half her age, perhaps because of her Atlantean heritage, but more likely because she’s relentlessly upbeat and optimistic, traits I don’t share.

She may be the most normal person in our group, which will give you some idea of the gang that gathers weekly. There’s me (don’t ask), J.D. and Monica the sci-fi nerds, Kurt the mythology geek, and an H.P. Lovecraft devotee named Joe. I keep worrying we’ll accidentally summon Satan, or call forth the long-lost ghosts of Atlantis, or draw thunderbolts from an angry Zeus. No, seriously, they’re good people. We mesh well, as social misfits often do.

We used to meet at Paradise Perks in Irvine, a Bohemian coffeehouse renowned for its coconut smoothies and open-mic comedy nights. Very laid-back. You expect the cast from “Friends” to stroll in any time. But there was trouble amongst the lattes.

One of the writers, who I’ll call “Donald,” had been telling fantastic stories, like the time he gave Michael Crichton the idea for “Jurassic Park,” or James Cameron the idea for “Avatar.” He was the Cliff Claven of our writing group, boasting of things that probably never happened. We all took Donald with multiple grains of salt, until the night Joe read a story about a satanic wizard with murderous powers—told in creepy, cold-chill detail—and Donald took it a little too seriously. He started saying Joe wanted to kill him.

Joe threatened him during a meeting, he said, though no one remembers that. Joe had a gun, though no one saw it. I suspected it was because of the prescription drugs Donald admitted taking, a pharmaceutical cocktail that could blur the line between the real and the imagined. It was almost a compliment: Your writing is so scary that I’m afraid of you personally.

We hoped to head off trouble, calm him down, but it proved impossible. Donald went to the police with his wild story. He went to the FBI. No one believed him, because he had a history of delusional behavior, and similar prior complaints. But he still wanted to attend our meetings.

That’s when I get the email from Lisa, sent to everyone except Donald. “We have a situation,” she says delicately, adding that she’s decided to change our venue for safety reasons. We’re moving to a place I can’t reveal, for fear that Donald will read this and find it, but the meetings will continue as scheduled on Tuesday.

Which makes us fugitives, meeting in secret at an undisclosed location, because Donald may be lurking back at Paradise Perks. We’re all set to gather for our first relocated meeting, but there’s another hitch—the place is closed for a company holiday. So we need a different, unknown-to-Donald location, with very little notice. Monica suggests Comics Toons N Toys in Tustin, whose owner kindly agrees to let us use his gaming room for this one evening. (But next week it’s back to the secret place.)

The comic shop has a “closed” sign out, but we can sneak in after hours, circumnavigating a city block full of comic books to our secret rendezvous in back.

I arrive to find the group huddled around a table, surrounded by posters and action figures. The place is ghostly, as if haunted by the characters from all those graphic novels—Venom, Sauron, Apocalypse, the Man-Thing. A sign reads “Eye protection must be worn,” which makes me wonder what the hell they normally do here.

That’s when we hear footsteps, even though the place is closed. Someone’s pacing the aisles, between the endless stacks of Silver Age comics in their upright plastic sleeves. I can swear they’re coming closer.

It’s seriously disturbing, like getting a tap on the shoulder when you’re alone in the bathtub. It’s probably just the owner out there, we know that, but suddenly the shadows seem longer and the echoes more penetrating. You can almost hear the harsh laughter of all those vengeful villains.

The footsteps recede. No one gets up to see who it is.

In the nervous silence, we start talking about comic books. J.D. and Monica are avid fans. I tell them I used to own the very first issue of “The Amazing Spider-Man,” back before they were born. To put that in perspective, they just published the 700th issue in which—spoiler alert!—Spider-Man dies.

It’s true. Spider-Man is dead. There won’t be a 701st issue. But his ghost lingers, in the comics and in the store, giving our backroom hideaway a sort of campfire creepiness. The place seems haunted on many levels—by fanciful spirits and real-life crazies, including a wayward braggart named Donald.

Most of us do. J.D. and Monica are writing interlocking vampire stories. Joe’s writing about a one-eyed treasure hunter. Kurt’s doing a comedy about Medea, the Grecian matriarch who murdered her children. Lisa writes about the destruction of Atlantis. And I’m exploring my favorite genre, the zombie crime novel.

In that moment we’re bonded in a way I can’t fully explain, by the sharing of our words in a place of proud heroes and ignoble villains, bemoaning the death of Peter Parker, hiding out all the while from a pesky paranoid who can’t tell the difference between fact and fiction.

Which I admit is sometimes blurry.

Donald never does find us, but he may show up in our stories. That’s what writers do, we draw from our lives, using those night-bumping terrors as raw material—casting out demons by capturing them in words. Try it sometime. I swear it works.