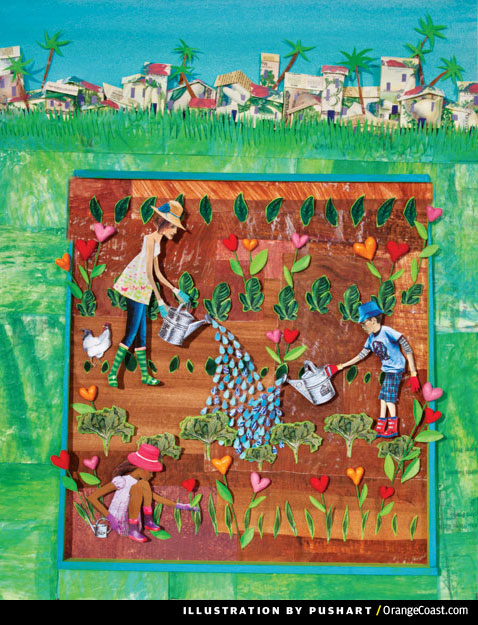 Three years ago, after 14 years of freelancing food and restaurant reviews in Orange County, I began a slow, internal panic. Anything I pitched an editor was declined or flat-out ignored. The more desperate I became, the wilder the pitches got, and the climate for my craft wasn’t helping. With the burgeoning popularity of blogs, Yelp, and other social networking and user-review websites, gigs for food critics were as rare as black truffles.

“You’re a dinosaur, Kelly,” a friend had said one crisp fall evening as I considered my situation during our kids’ soccer practice.

I’d just secured a job as a server in a restaurant I had once written about. My framed, full-length review still hung in the entryway. I knew I wasn’t the only one whose primary source of work was shrinking. I knew of a photographer-turned-personal trainer, a mortgage industry executive who sold highway signs, and a teacher peddling handbags. My new reality was secondary to helping put food on the table for my family of four, including a husband approaching his own employment transition.

At first, I daydreamed about the past: the lavish meals I ate incognito at O.C.’s hottest new restaurants, and those days when my worst problem was trying to decide if the ahi tartare was best paired with sauvignon blanc or grüner veltliner. Then my husband interrupted my reverie with a jarring idea.

“Big Joe has a 4-H cow.” Big Joe was our neighbor Dean’s son who had a ranch in Yorba Linda. “It’s going to auction after the fair. I’m thinking about going in on a half.”

“Yeah, with another family.”

It sounded preposterous at the time. And old-fashioned. Who would take care of all the … details? Was this cow certified in any way? When I thought of beef, Wagyu carpaccio with wild arugula and shaved pecorino Romano came to mind, not the OC Fair. But I knew it would save us money in the long run, and our financial situation was getting worse.

We ended up buying half a heifer, and turned our coolers over to Big Joe.

Turns out, fair livestock is graded rigorously before auction. Also, unlike factory-raised feedlot cattle, they ostensibly have a better quality of life. Soon Big Joe returned our coolers loaded with every cut of beef imaginable, fastidiously wrapped and labeled. All of it—from fillet and porterhouse, to short ribs and ground beef—at the same price: just under $3 a pound. We swooned over the superlative flavor and texture of the beef, along with Dean and his wife, Mary Ann, who had bought the other half and also had a loaded freezer.

It was then that I began to see my neighbors’ resourcefulness in a new light. Mary Ann, a gifted gardener, was forever bringing us seedlings, but I had never bothered to plant them. Until now. The tuna fillets Dean gave us after fishing trips, which often languished in our freezer, suddenly became anticipated dinners. I was encouraged and inspired by the aggie pride and generosity of our little community in unincorporated North Tustin.

About the same time, I noticed chickens milling about in an overgrown front yard. Not just a few birds, but dozens. Some had Phyllis Diller headdresses; others flashed iridescent green and brown feathers as they dodged about the yard. Many roamed freely on the third-acre lot, taking dirt baths, eating the blueberry and rose bushes, and retiring for the evening in a custom-built coop prettier than most back-yard gazebos. I introduced myself to their owner, La Donna.

My kids spent hours chasing and catching her chickens, holding them, and talking to La Donna, who appreciated each of her birds’ distinct personalities. We decorated our empty supermarket egg cartons, and stacked them up at her door to be filled for $3 a dozen. Sure, you can get eggs for less than that at Albertsons, but not multicolored, organic eggs that come with free junior farmhand privileges.

My kids began to understand and appreciate where their food comes from. They learned, for instance, that Olive lays army green eggs, Snowflake is broody, and Daisy is always on break. Bamboo lays dainty pointed pink eggs, Old Lady’s are large and copper-colored, and Violet sneaks into La Donna’s kitchen through an open window to leave her pale blue orbs in the sink.

The more I thought of food as a gift from the land and not as something to be imported, judged, deconstructed, or mercilessly manipulated, the more food I found waiting for me. My back-fence neighbor, Jim, brought to the local pool party juicy bacon-wrapped duck fillets from his recent hunting expedition. My mom brought me figs, persimmons, and though I protested, bags of huge, flying-saucer-like patty pan squash from her Old Towne Orange garden. My green-thumbed friend Lynn didn’t buy lettuce; she grew it, and had enough not only for our family, but for our four tortoises. She also had so many tomatoes that she canned her own sauce. We ate it with pasta and washed it down with wine her brother made in Santa Ynez. She even got out her old bread machine and showed me how I could bake a yeasty, delicious loaf for far less than it cost to buy one.

“Don’t ever buy lemons,” neighbor Nan scolded. “We have more than we know what to do with!” She also grew pomegranates, infusing them with vodka and  giving them as Christmas gifts.

When friends went on vacation, they’d ask us to water their gardens and take whatever vegetables we could during their absence, and we did. Each gift I pull from a bag or basket left on our doorstep announces itself like slot machine reels landing: Orange! Lemon! Plum!

In the heat of that first summer of our financial scare, we learned to grow our own food: tomatoes, zucchini, strawberries, kumquats, arugula, onions, and just in time for the holidays, pumpkins. It was a modest harvest, but still enough to share with anyone who stopped by. Gone were cut flowers from the store; in came exotic-looking bouquets of bright orange clivia, palm fronds, protea, and kangaroo paws. During the Week of the Teacher, my kids disappeared behind the massive homemade arrangements they proudly carried to class.

I wondered if this was what life was like here a hundred years ago, when just a few houses stood among the acres of citrus groves. It was a simpler time of sharing, bartering, and learning from one another.

We’re far from living a sustainable lifestyle, and hardly off the grid, but with our new pioneering spirit, we’re getting by. We still have to go to the store, but now I realize how much we can do for ourselves with a little help from our friends. And while I’ve found work again as a freelance food writer, a regular gig is still as elusive as a Saturday night reservation at Marché Moderne. But I’m OK with that.

“The tree is full,” my friend Jane says as she places three shiny black avocados in my purse at our sons’ baseball game. It occurs to me that there are more meaningful ways to measure food and its purveyors than restaurant star ratings.