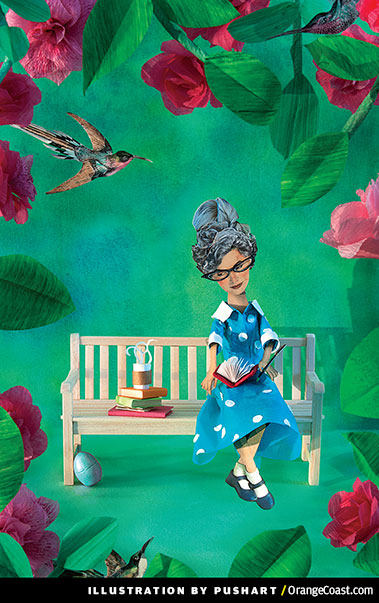 Last Easter, here at La Palma Royale Senior Living facility in Anaheim, part of the low-key celebration was hiding plastic eggs filled with candy. “Well, one thing for sure,” said Dapper Don, nicknamed for his signature pompadour, “is that we’ll forget where we hid ’em and that’ll lead to some kind of fun!”

Don, who died several months later at 91, nailed that one. Being long of life and short of memory, residents here often have an easier time embracing their oncoming passings than they do their approaching dementia. But Don was one of those admirable residents who didn’t let dementia rule his life, and kept his sense of humor to the very end.

But in study after study of aging Americans, it has become clear that we seniors dread ensuing brain fading as much as we do heart attacks, strokes, and other killers. To some, it’s the worst possible option. Among our greatest fears is that we will forget who we are, and that we won’t recognize you when you visit us.

I arrived at La Palma Royale on Jan. 12, 2012, at age 66. I have profound bipolar disorder (how lucky I am that it’s now fashionable), along with a post-traumatic brain injury from a fall and resulting hematoma. In a coma for three weeks, I was hospitalized at UCI Medical Center in Orange, destined for what my doctors said would be a vegetative state. The physician on duty called my daughter and son-in-law in Los Angeles one night to say that my brainwaves were flat-lining.

“Don’t do anything,” Kirsten said. “We’re coming right down.”

And somehow that miraculous love connection prevailed. The next morning I regained consciousness. My first words? Not “Thank you for standing by me” or “I saw a white light,” but “I need a Coke! Right now!” and “Has anybody cleaned my apartment?”

I struggled for months to live on my own, stretching my Social Security, savings, and donations from family and friends, but it became apparent that I wasn’t cutting it. For 44 years, I’d made my living as a journalist and a freelance writer, but suddenly I couldn’t drive, operate my computer, or sell myself on the phone. I would have to go to some kind of facility that could take care of my meds, meals, and other daily needs. My daughter and I chose the reasonably priced La Palma Royale, three miles north of Disneyland. (In some ways it’s actually like Disneyland with its own “rides”: wheelchairs and motorized carts.)

After Kirsten and I finished the vaccinations and paperwork—officially admitted—we sat in the car parked at the curb, she crying in relief, I with buyer’s remorse.

“Honey, I don’t want to live here with all these old people!”

“Mom,” she countered, drying her tears, “you are one.”

As one walks the halls of this facility of more than 150 residents, it becomes apparent that endemic TV-watching is the daily counterpunch to loss-of-touch reality. From their recliners on each side of the mostly shared rooms, residents are evenly divided between CNN and Fox. The only time they’re in sync is when the 90 black-and-white minutes of “I Love Lucy,” “The Andy Griffith Show,” and “The Dick Van Dyke Show” offer a port in the storm of memory loss—because everyone has seen the episodes so often. It’s as close to wholesale happiness as it gets here.

While television is an easy cop-out for most, the higher functioning residents can be found burrowing into crossword puzzles. They are pulled out as sharpening exercises at breakfast, lunch, and dinner, a preferable alternative to hearing, one more time, a tablemate’s stories of failed marriages. (“What’s a five-letter word for love affair? Tryst.”)

To be fair, things run fairly smoothly at La Palma Royale, and I don’t have a lot to get annoyed about. I keep track of myself and “my stuff,” as George Carlin would say; I’m not one of those Calamity Janes who’s chronically accusing someone of stealing some valuable, only to have a caregiver discover it later in my drawer.

We have a teacher—the bright and funny Leonard from the local community college district—who comes every Friday morning to tickle our memories with trivia questions.

“Who was the American president who had an extra-large bathtub made for him?”

“Who was the band leader known as the ‘King of Swing and Sway’?”

“Uh … uh … uh … Sammy Kaye?” Blue-Haired Betty somehow holds tight to those ferry rides she took to the Catalina Casino Ballroom, and is the one who always knows the answers to the music trivia.

A little more than a year ago, I started a Wednesday night rosary group, not because I was clinging to my fading Catholic faith, but because it was a battle cry to the annoying evangelists who lean on the message of “Jesus loves you” every time they pass me in the hall. These sturdy Protestants apparently believe that if they can keep that mantra in the forefront, Jesus himself will ensure their wiring stays intact.

They do so because there always looms the possibility that if TV and crossword puzzles don’t firm up the gray matter of first-floor residents, we may be quietly shipped upstairs to the dementia unit.

My first year here, I struggled on and off with depression until I got used to sitting on the patio with the palm trees, rosebushes, water fountain, and hummingbirds. Now I enjoy the predictable food, and the kitschy monthly birthday parties with the karaoke singer who wails off-key. I dig in for book exchanges with my neighbor Karen and watch “60 Minutes” with captions with my beloved Sandi—fellow residents who also have skirted the transgressions of time.

Probably because I am one of the youngest residents, I have gotten sharper and healthier thanks to my own regimen of brain exercises—making lists, reading the Los Angeles Times, People, Orange Coast, and Time, as well as the long-neglected Bible. I write love letters to people who visit when they can. I book rides on the OCTA Access Bus for a weekly trip to the chiropractor and an occasional matinee at the Cine-
mark in Orange, savoring a Starbuck’s latte before returning home. Small pleasures have become everything.

At first my dear family and friends couldn’t understand why I didn’t pursue writing gigs, but for two years, there has been a shyness beyond the traumas I have endured. Only now am I realizing that I can still write; yes, I will write.

Meanwhile, I’ve become a functioning member of the La Palma Royale family. I count my blessings as I watch friends unhooked from breathing machines, and contemplate a future in which I may land upstairs with Alzheimer’s or some tricky disease. I accept that I may be here for a goodly number of years, and that sooner or later I may draw my last breath here.

One recent evening when I went upstairs to track down the med tech, I noticed some improbable things: The dementia patients actually were having fun. They sat at tables in the common area laughing and teasing one another. I found out that a widow and widower cuddling on the couch were in love. The residents’ artwork on the walls had a Van Gogh quality. Music from the big-band era played in the background. These supposedly lost ones had actually found life’s most precious gift—that of living in the moment.

I can say now from all my experiences that I am not afraid of dying, nor am I afraid of living at La Palma Royale. Everybody’s gotta be somewhere, and I am here. If, upon visiting me, I do not know who you are, no worries, we’ll start from zero and get acquainted. If you want to feel bad about that, that’s your choice. As for me, I will live believing that “Today is the first day of the rest of my life.”

Illustration by Brett Affrunti
This article originally appeared in the September 2014 issue.