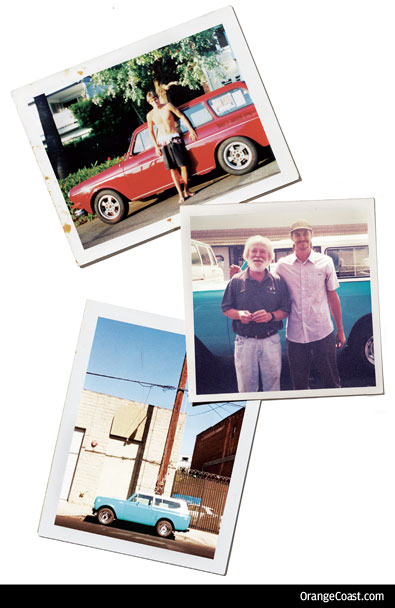 When we were growing up in Laguna Beach, Saturdays for me and my pals were about basketball practice, hanging out at the beach, sleeping in, and homework. But when I turned 13, Saturdays also were about something else: working 8 to 5, side-by-side with my dad, to restore my first car.

Granted I wouldn’t be driving it for several years, but it was mine, all mine, and I loved it—a 1970 Volkswagen Squareback. Picked up for $300 after we saw it parked on 17th Street, the car was an eclectic testament to Dad’s well-honed ability to restore classic treasures on the cheap. It had an electric sunroof from a Jaguar XJ6, a wood steering wheel from an ’85 Alfa Spider, and Porsche wheels we picked up at a swap meet. I mostly just watched for two years as my father poured his blood, sweat, and cash into that car. I didn’t learn a thing.

After my parents divorced, he and I didn’t live under the same roof, so he saw it as a great way to spend time with me while doing something constructive. I simply saw it as missing out on whatever my buddies were doing, which was pretty much nothing. Dad was—and still is—a stickler for detail, precision, and the perfect paint job. I couldn’t have cared less back then; I just wanted it done and drivable.

A couple of years later when the VW was done, I would drive over to the Donut Derelicts car show in Huntington Beach for a coffee and a surf. All the old guys loved that Squareback; it was a throwback to their youth and it fit perfectly into the Orange County surf culture. For me it just meant the freedom to roam.

Then I turned 17, sold the thing, and bought a Jeep because it was “cool.” I found out years later that Dad had broke the bank on that VW, spending money he didn’t really have at the time. I also found out how much our time working on it together had meant to him, and ultimately how my decision to sell it broke his heart.

Twenty years later I droveto Santa Barbara to inspect an ’80 International Scout II, the precursor to the modern SUV. I heard somewhere that the best way to imagine what one looks like is to ask a 3-year-old to draw a car with a crayon. The relentless California sun had faded its original rich turquoise to a bleached-out robin’s egg blue. But it was a steal—rust, rattles, and all.

A year ago, when I showed up with the Scout at Dad’s rented shop in Costa Mesa, he just shook his head as he slowly made his way around the body. Neither of us knew much about Scouts, but he had done plenty of restoration work on other hopeless cases: Alfas, Porsches, Metropolitans, El Caminos, and a stable of motorcycles. My experience began and ended with the VW. Would Dad dive into a project like this with me again?

At the time, I was living in L.A. and spent the bulk of my weekdays in a softly lit office, sitting in an ergonomic chair in front of a computer screen. I wasn’t sure how to change my car’s oil, let alone weld anything. Every weekend, though, I’d drive to Costa Mesa so we could work long hours, side by side in his shop, tinkering with metal parts, making them perfect. He tired more easily than he did back when we’d worked on the VW, having run into some major health issues in the interim. But this time I vowed to be a better student.

In a few weeks we’d stripped it down to just the frame and the motor. I’d already learned how to cut out the rust, fabricate new metal, and weld it in. Eventually, the Scout was “cancer-free” and I’d picked up several new skills. I had the welding holes in my shirts to prove it.

Then came the bodywork.

No one could have prepared me—not even via intervention or therapy—for how labor- and time-intensive bodywork could be. There were dents the size of fruit bowls, along with a general complexion that looked like bad acne. It seemed like someone had made a conscious effort to crumple the Scout’s old doors and every body panel. But somehow, under my father’s guidance and sometimes firm direction, we brought it back. Weeks passed, then months. The Scout’s body got straighter. I listened and learned. I also got a new perspective on my father. I found out that his dream was always to have a cabin in the woods; that’s my dream, too. I listened to grandiose stories about my grandfather jumping trains to Alaska, and remembered how I, too, had been bit early by the travel bug. And I realized that I have more in common with my dad than I thought—namely stubbornness and the desire to build something cool.

I don’t believe father-and-sonprojects are unique. They happen all around the world, every day. You may be asking, “What the hell is so special about changing an oil filter, or fixing a broken windshield, or tackling a frame restoration?” At face value, nothing really. What’s unique—in each person’s experience—is the connection that’s made in the course of such an undertaking.

Ten months after we started work on the Scout, I pulled her out of Dad’s shop, each of us feeling a little melancholy that the project was done. There was no way to truly thank him for what he’d given me, so we took a picture of the two of us in front of her, and then I drove her around Newport for a few hours. I couldn’t get the smile off my face.

I suppose what I got from all of this—besides an education—is the understanding that it’s not the project itself that’s important, but rather the moments along the way. Those moments taught me about myself as well as my father—and to next time buy a vehicle with a straight body.

Here, ultimately, is what I learned: When I was a kid, a dad who could fix anything was the coolest dad on Earth. And that’s the kind of dad I want to be someday.

This article originally appeared in the June 2014 issue.