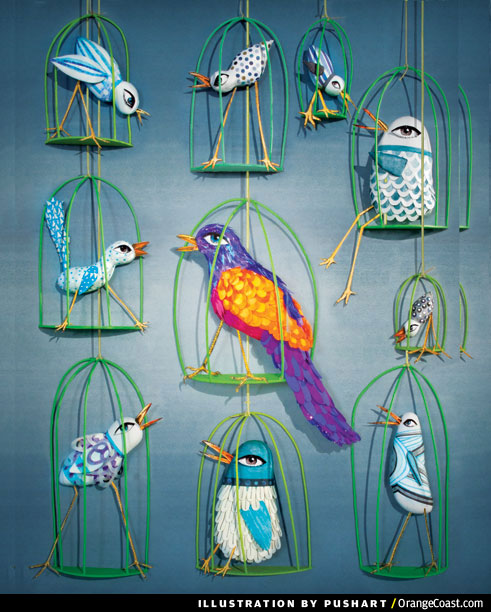 I look up from my wallet, waiting to get my debit card back. The Target cashier, a wide-eyed creature with impossibly shiny hair, cocks her head and formulates a thought.

“Sooo,” she begins, stretching the word beyond recognition. “What are you?”

I don’t really say that. Instead, I wrangle my mouth into a smile and tell her I’m Armenian, while waving my hand in a gesture that’s meant to convey: Hey, no big deal. Nothing to see here. Just passing through. Lovely weather.

She cocks her head the other way. The receipt is taking forever to print.

Don’t say it. Please, don’t say it. Come on lady, just let me take my discount cosmetics and go.

If this were a Looney Tunes cartoon, cracks would form on my face. My body would fall apart like a shattered mirror, the pieces would hit the floor, and Bugs Bunny would enter stage left, broom in hand, to sweep me up.

I love Orange County, I do. I love living in Irvine, working in Newport Beach, exploring the gustatory delights of Costa Mesa, and surfing in San Clemente. Since moving here six years ago, it has become my home. But seriously folks, must every conversation I have with a stranger begin with a Kardashian comparison?

Maybe I had it easy growing up in La Crescenta, a Glendale suburb that is home to a large Armenian population. People there aren’t curious about my ethnicity. In O.C., it seems to be all anyone wants to talk to me about.

I shouldn’t complain, because most people are well-meaning. But it still makes me sad every time a stranger asks me to categorize myself, making me feel like an outsider, a foreigner, an “other.” I’m sure they don’t mean it this way, but it feels like I’m constantly being reminded: “You’re not one of us.”

Meeting me, some people lower their voices, ask me if Armenia is one of the “Muslim countries” and then literally—literally!—breathe a relieved sigh when I tell them it’s largely Christian.

The other day, while shopping at the Irvine Spectrum, a teenage girl wanted to know where Armenia was.

“It’s between Turkey and Azerbaijan.” Blank look. “Between Georgia and Iran.” Another blank look. “It’s south of Russia, between the Caspian and Black seas.” Silence.

Do I look like your geography teacher? Find me a globe, kid, and I’ll point to it.

My name is the problem. It’s strange sounding, I’ll grant you. When I was 10 or so, on a family trip to Lake Tahoe, a girl asked me my name.

“Your name is Plastic?”

The point is, my name’s not Amy—except at Starbucks.

So I understand that, when I introduce myself, people often feel they need to say something. If they’re kind, they’ll say, “Oh, that’s a pretty name.” Usually they just say it’s interesting. And once something like that’s on the table, Twenty Questions begins.

If I don’t play along, I feel like a jerk.

I want people to like me, perhaps to a fault. I’m the kind of person who apologizes when someone bumps into me. If I admit that I don’t want to be compared to Kim Kardashian, someone is going to shake his head and call me PC, and I’ll melt into a puddle of sad.

It’s a risk I’m going to have to take, though, unless I want to keep having the same Kardashian Konversation, reliving the moment like Bill Murray in “Groundhog Day.” What do people small talk about when I’m not around?

I explain it to friends like this: Imagine an alternate reality in which you’re sent to live on a planet far, far away. The planet is populated by intelligent life forms that look almost exactly like you. They’re nice folks, and you happily live with them for many years. In fact, people from all sorts of other planets are living there, too.

For whatever reason, the locals know very little about Earth. They’ve heard of it, sort of, because they know one celebrity from there. Every time someone finds out you’re from Earth, a light bulb goes on.

I realize this is an imperfect analogy, but we’re all human, and we want to belong. No one wants to feel like the odd one out.

Things are getting better. And I’m fully aware that if I had been living here fifty or a hundred years ago, my life would be a lot harder. But we still have a way to go.

Until then, I might start carrying an info card to hand out:

Now let’s talk about something else.