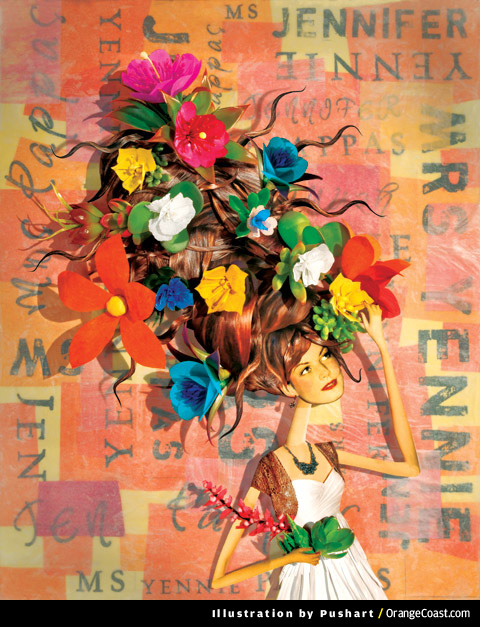 “What’s the value of a name? Is it just a name, or something more?”

It’s a Tuesday morning, first period at Laguna Hills High School. My question—part of my introduction to reading Arthur Miller’s “The Crucible”—hangs in the air between myself and my juniors. “This is an essential question of the play,” I say, trying to read their half-asleep faces. “Especially for John Proctor, whose most valued possession is his good name. We no longer live in a Puritan society, far from it, but what do you think? Is a name just a name?”

A student raises her hand. “I don’t think names are important,” she says. “It’s just a title your parents give you when you’re born, before they even know who you are.”

“I’m one of a million Taylors in the world,” another student pipes in, “so I don’t feel any special attachment to my name.”

“So names have nothing to do with your identity or sense of worth?”

All but six or seven of the 36 students in the room are shaking their heads.

I wasn’t terribly surprised. Earlier in the year, I’d assigned a “My Name” writing lesson based on a chapter from Sandra Cisneros’ “The House on Mango Street.” The assignment asked each student to write a poem about their first names, last names, nicknames—the history, the sound, and any stories or memories associated with them. We used “Mango Street” as our model, looking carefully at Cisneros’ rich use of sensory detail.

“In English, my name means hope,” Cisneros writes in the short vignette. “It is the Mexican records my father plays on Sunday mornings when he is shaving, songs like sobbing. … At school they say my name funny, as if the syllables were made of tin and hurt the roof of your mouth.”

And though some students had composed beautiful, unexpected poems, most had written short, unimpassioned odes. Even students with unusual given names such as Aspen or Chance had trouble extracting anything special from them.

Part of me blamed Orange County for the students’ lack of inspiration. Laguna Hills is not particularly diverse. I got the sense that our community is so isolated from our original cultures that we no longer have a sense of heritage or our unique place in the world.

I felt differently. I’d attended a private school in Bellflower, where the student population was heavily Dutch American. I moved through the school system hyperaware of my skin color, my Greek-Mexican duality, my mysterious name. As one of only a handful of “ethnic” students, I always stood out.

Recently, the question of names took on fresh implications. I was newly married, and undeniably conflicted about changing it. For one, I liked my last name. It was Greek, it was different, and I was proud of that. It also was the name with which I’d established myself as a writer. It encapsulated every accomplishment, every dream, every quirk I’d ever possessed. Plus, it didn’t help that my married name, Yennie, happened to rhyme with Jenny—a derivative only my grandmother was allowed to call me. I went by Jen and only Jen, but I knew the temptation to call me Jenny Yennie (a conundrum for Spanish speakers, for whom a J is pronounced as a Y) would be too great for some to resist.

Six months into my marriage, I still was unable to make an appointment at the Social Security office. Steve, my husband, had made it clear he was no fan of hyphens. I agonized privately. Do I keep Pappas and add Yennie, no hyphen? Do I swallow my pride and take Yennie to please Steve and be the good wife? My students knew me as Ms. Pappas, as did my editors and everyone else I knew professionally. I clung to my view of one’s name being an extension of one’s identity. I felt it personally when John Proctor cried out to the people of Salem: “How may I live without my name? I have given you my soul; leave me my name!” Yet this wasn’t 17th century Massachusetts; this was 21st century Orange County, where women changed names as easily as hairstyles. Was I being ridiculous? Were my students right? Should I just let it go?

I filled out two applications for a new Social Security card. On one, next to “Name to be shown on card,” I wrote Jennifer Yennie. On the other, Jennifer Pappas Yennie. Both sat on my desk for weeks, awaiting my decision. Steve didn’t ask, and I didn’t mention, how seriously the whole process rattled my sense of self. I bore my identity crisis alone, signing Jennifer Pappas to documents and checks while answering to Mrs. Yennie in the classroom.

I finally made my decision one day in February. I drove to the Social Security office in Aliso Viejo, plucked a number and nervously waited to change my life. Twenty-five minutes later it was over, out of my hands. As far as the federal government was concerned, I was a new person—the same, but different, a person with a very long name.

An envelope containing my new card arrived in the mail two weeks later. Alone in my office, I opened it and looked at my new Social Security card. The name took up two lines. There were too many n’s and the name looked stiff and uncomfortable, like a new pair of jeans.

But the longer I stared, the more I liked what I saw. I saw my husband. I saw our life together. I saw us holding hands while we watch TV. I saw long hikes to Lake Barbara with our dog. I saw our succulent garden and bike rides to Main Beach. I saw the love of my life, giving everything he is and has—to me.

I saw myself in my new name, too. The me Steve fell in love with somewhere between Las Brisas and the San Diego Zoo; the me I would always be, no matter what name was printed on my Esquire subscription. I was the sum of all these letters and parts, of memories past and future. I was the beginning and the extension of incredible people, shared history, and unduplicated experiences.

For the first time in months, I felt wholly myself.