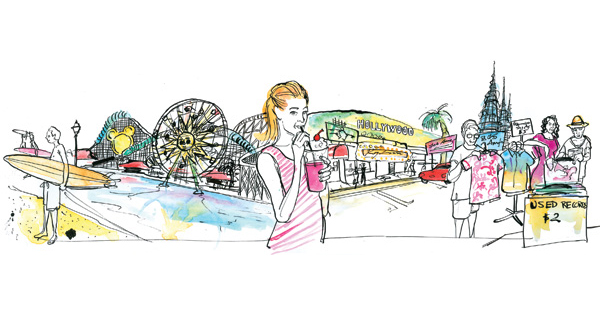 It has been 35 years since I first set eyes on California. I was young, and thought it was the most amazing place I’d ever seen—so amazing that, for a long time, I wasn’t sure what exactly amazed me. My memory was a blur of attractions pointed out by the college friend I’d come to visit: Disneyland, Knott’s Berry Farm, the Hollywood sign, the Griffith Observatory laser show with the Pink Floyd music. The campus to which my friend had recently transferred, UC Irvine, had no ivy and was even younger than I.

It was a whirlwind grand tour, the sort that California visitors take every day of every summer. And until I was reminded recently, I’d forgotten how much of it was lost on me. I still can’t remember whether I rode on Space Mountain. But I can close my eyes and recall everything I saw when I wasn’t sightseeing: the exact shade of the pale sun the first time I arrived at LAX, the precise heft of the big-city newspapers in suburban driveways, the blue of the swimming pool where, one morning, I discovered my friend’s ordinary-seeming mom on the deck practicing the then-extraordinary art of tai chi.

This is how it goes in Southern California. People always think they’ve come for the tourist stuff. This summer, our California-grown daughter married a man she met in London. The wedding brought first-time visitors from around the planet. It was two weeks of nonstop tour-guiding—Disneyland, Knott’s Berry Farm, the Hollywood sign, etc. Celebrities were sighted. Whales were watched. Architecture, art, and cuisine were appreciated. Weeks were spent choreographing group outings. But the California we introduced wasn’t necessarily the California that stuck.

Who knew an afternoon buying used records could make such an impression? Or that an impromptu attempt at stand-up paddling could make for so many happy, if sunburned, guests?

One group buzzed for days after someone showed them how to fold a burrito; another kept going back to Ruby’s Diner for the apparent miracle of milkshakes with breakfast. The theme parks, the celebrity sightings—sure, those were distracting. But the ordinary was what amazed them. The freeways they disapproved of but tackled, the reliable sunshine. The Watts Towers rising like found art, the cheap Hawaiian shirts at the thrift shops. Their enthusiasm made us feel like the Chamber of Commerce. We began compiling a list: Underrated Wonders of Southern California, International Edition. (No value-added tax! Outdoor kitchens! Costco gas!)

Well, what can we say? Boosterism has always been big in these parts. But maybe the real reason so many visitors look beyond guidebooks is that you can only fool so many people so much of the time. For all its attractions, the real Southern California isn’t a place for tourists, really. It’s a place to live more than to visit. Landmarks defy preservation. History is in perpetual motion. Things are constantly changing from the postcard versions. Disneyland is surrounded by cheesy motels and sketchy neighborhoods, Malibu is a wide spot on Pacific Coast Highway. The real housewives of Orange County are increasingly broke, and the real housewives of Beverly Hills are increasingly Persian.

Tourism is about what we make public, and we are a private people—a megalopolis of individual lives in individual homes in preferably guard-gated communities. Common dreams aren’t our strong suit; surprising numbers of us are here because, back home, we didn’t play well with others. The tour guides don’t tell you that, and neither should I, probably.

But saying it out loud feels like a truer introduction to a place that has always been less about what you see than what you experience. Thirty-five summers ago, I came to take snapshots and left realizing that, here in the wide, pale light, an ordinary person could do almost anything—cross a continent, write for a big-city newspaper, learn tai chi by her pool. That, even without a guidebook, a traveler in California could amaze herself.