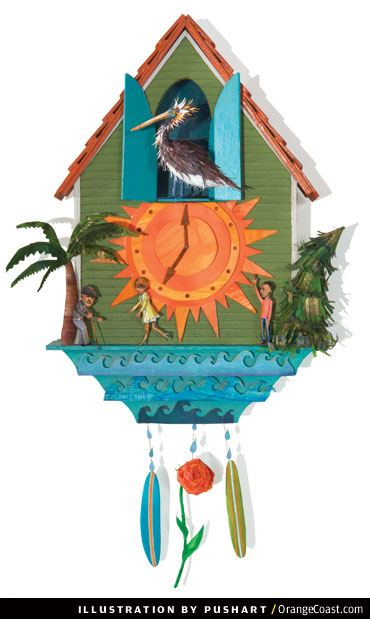 One crisp, cold day in February I got the phone call I’d been dreading, the worst call of my life. It found me, even though I’d moved across the country.

Six months earlier my husband and I had closed up our house in Huntington Beach and gone to Pennsylvania to care for my husband’s 88-year-old father. His wife of six decades had died the year before, and now, with his own health failing, he needed our help.

The three of us settled in together and developed a routine; my husband worked as a sales rep while I managed the house and cared for his father. Everything was going smoothly, until I received the phone call. Back in Southern California, nearly 3,000 miles away, my own father had become ill.

“I’m flying back on the first plane tomorrow,” I told my husband. “You’ll be fine here. I’ll reschedule your father’s appointments, and I’ve got casseroles in the freezer.”

But I did know. I’d learned this lesson the hard way on another cold February day many years before when an oil-soaked bird forever changed my priorities and taught me that some things simply can’t wait.

The news on the radio was bad that morning in 1990. Five days after the accident, the situation was getting worse. I couldn’t concentrate on my job. My mind kept drifting to the shore of Huntington Beach where the BP oil tanker American Trader had gone aground and punctured its hull with its own anchor. It carried nearly 400,000 gallons of North Slope crude.

Those first days, most of the oil sat in a 40-square-mile slick. But on Feb. 13, strong winds blew the monster ashore. Two inches of thick, black goo covered my beach. The oil fouled the strip of sand where I walked, fouled the sea where I watched dolphins frolic and pelicans make spectacular dives.

On the radio, authorities were asking for volunteers to assist with the sea bird rescue. I wanted to help, I really did, but I was a costume designer with a looming show deadline. I knew my boss wouldn’t approve of my leaving when we were so busy. I hate to admit it, but I didn’t have the guts to put up a fight.

I was at work for less than an hour the next day, Valentine’s Day, when a second plea for volunteers came over the radio. And still I stayed at work.

It’s said you have to hear something three times before it sinks in, so when the request for volunteers aired one more time, something clicked. No longer able to stand by without helping, I told my boss I had to leave, hurried home, changed clothes, and headed to the beach.

The throat-burning odor of crude replaced the fragrance of my co-worker’s Valentine’s roses. I joined about 20 other volunteers outside the makeshift bird rescue center. After being issued disposable white jumpsuits, tall rubber boots, long rubber gloves, goggles, and a large cardboard box, we were given our training. The immediate danger to the birds, we were told, was hypothermia. The oil destroys the water-repellent properties of their feathers, exposing the birds to the chilly temperatures. I was even cold in my jeans, sweatshirt, and jumpsuit.

We were told how to approach an oil-soaked bird, how to hold it, how to get it safely into the box. The rescue people said that, if found early enough, the birds had an 80 percent chance of survival.

We worked in pairs. Earlier I’d spotted a co-worker, so the two of us teamed up. We headed toward the pier. For several hours we combed the shoreline, fighting wind and blowing sand, and found nothing, until, just as the orange sun was sinking between the two hills on Catalina, I spotted a wing tip jutting from the sand. And it was moving. We ran to the bird and began to dig in our clumsy, oversized rubber gloves, pulling wet, oily sand away from the wing.

The feathers were long and brown—an endangered brown pelican. My heart raced. We cradled it in our arms—it was remarkably heavy—and placed it inside the box. The feathers were moving, and I was elated. But then we realized it was just a trick of the wind, and our own wishful thinking.

Two weeks later, at the end of the cleanup, 1,017 live sea birds had been rescued. Of them, 141 were brown pelicans. Only 73 survived. I still regret that I didn’t answer that call for help sooner. If I had acted a day earlier, would the number of surviving pelicans been higher?

I still think of that bird, and am grateful for the lesson it taught me. Because, if not for it, I would have missed seeing my father one last time.