On Valentine’s Day 2017, my father suffered his final stroke. It wasn’t the worst one, and he wouldn’t die for another five months (on my husband’s 60th birthday, because Dad always had a way with dates). But the stroke set in motion a series of sad events—three hospital stays, two long stints in rehabilitation facilities, a five-day try at assisted living, and our resignation to a nursing home—that required all my mental strength to endure.

I flew to Denver a half-dozen times in those months, each time making a spiraling series of difficult decisions—most of them against my father’s waning will. In the end, I was forced to make the most difficult but obvious one, knowing it was time to let go.

It wasn’t until I found myself in this moment that I realized how the past five years I’d spent in the gym would impact my mental ability to survive this situation.

Six years ago, on the eve of my 41st birthday, I was in sorry shape. Climbing anything more than a single flight of stairs left me winded. I squatted only to get clothes out of the dryer. The last time I jumped rope, “Little House on the Prairie” aired on prime-time TV. And why, I wondered, while trying to avoid all the joggers on the narrow side streets of Laguna Beach, would anyone run if they weren’t being chased?

Even with the advantage of youth, sports weren’t my thing. I was never a coordinated kid. I struggled with amblyopia, better known as lazy eye, so depth perception proved difficult. Balls hit me more often than I hit them. I felt awkward and clumsy. And because weight was never an issue, I didn’t see the need to work out. Athleticism represented a club I couldn’t join and didn’t have much interest in anyway.

At some point, though, I decided things had gotten ridiculous. I didn’t aspire to run a marathon, but mounting a simple set of stairs without puffing felt like a functional necessity. My cholesterol and blood pressure numbers made me look decades older than my age. Plus, a mother should model better behavior for her preteen girl.

I found my only pair of tennis shoes stuffed deep in the recesses of my closet; so old and unused, the sole had separated from the bottom. The rubber tread literally fell off in clumps on first contact with the street. I didn’t fantasize about some Forrest Gump moment, but I figured I could jog more than a block. I was wrong.

After a few weeks of daily walks with new shoes, I graduated to hiking the hills behind my north Laguna Beach home. Flat trails led to steeper ones, and getting active allowed some of my depression to slough off like old skin. Eventually, though, it got boring. I started finding excuses to skip it and stay home. It took too long. The trails turned heavy with mud in the spring rains. Then there were rattlesnakes, and a suspicious-looking man. Was it wise to hike alone?

Feeling myself giving up and sliding back, I did the thing I thought I never would—I joined a gym. Rather than an impersonal 24 Hour Fitness or intimidating Equinox, I chose a small studio near my home that offered private sessions with personal trainers. I didn’t know the first thing about fitness. I couldn’t tell a kettlebell from a barbell, a lunge from a plank. I had only one request: Hold me accountable.

I started with small ambitions—a few awkward body-weight squats (which left me hobbling around my house for three days); pushups against a wall; a personal promise to cut down on french fries and experiment with greens. Easy goals led to harder ones. One day’s aspiration led to the next day’s accomplishment.

While I walked the treadmill, watching ladies across the gym busting their butts in boot camp, I plotted my plan to join them. And then, one day, I did. Five incline pushups became 25 strict ones. One assisted pullup turned into 12 weighted ones, and 19 unbroken on my own. Eventually, I could back squat my weight, deadlift 150 percent of my weight, and hold my gym’s record for a woman’s chest press. Maybe I couldn’t find my rhythm on a spin bike, nor was I coordinated enough to kickbox, but I could lift.

Exceeding my expectations of what I thought possible, after not knowing what I was capable of, shifted my perspective in ways I never expected. That lesson worked outside the gym as well. People began commenting on my confidence more than my physique. My mentality changed more than my muscles.

I started saying yes to things that scared me: mountain biking, paddleboarding, an after-dark kayak tour, and an hour floating in a sensory-deprivation chamber. I wouldn’t have done any of this without a new story in my head—yes, I can.

A few years back, with my newfound confidence, I was ready to tackle a bigger fear—the Pacific. I’d lived in Laguna Beach nearly 20 years, and I had yet to go into the ocean. The waves were rough, the water cold. There were riptides, stingrays, and more frequent shark sightings. Nonetheless, I announced to my teenage daughter I was going in.

“You hate the ocean,” she reminded me.

“Not anymore,” I said. I marched into the surf and was, within moments, knocked off my feet by a big wave. It was strong enough to drag me a distance. Sand burns rashed my torso.

My daughter ran to my aid (as did a few other sunbathers on the beach). “You have to dive under,” she said. Wanting to model good parenting—grit, tenaciousness, and a get-back-on-the-wave mentality—I got up and brushed off the sand. Back in I went. Back down I fell. Even worse this time.

This tale doesn’t have a triumphant end. Some stories, I realized, don’t have happy endings. Life has its limitations, and sometimes accepting them takes greater strength. (That’s the new story I’m telling myself.)

But the bigger lessons were yet to be revealed.

With every hospital visit and health scare, I pictured myself mentally suiting up for the gym. It took all of my psychological strength to watch my father wither away. Forced to make a series of medical, financial, and legal decisions on his behalf, there were no good options. I’d sit in my rental car, eyes closed for eternal moments, imagining myself standing beneath the squat rack, setting the bar across my back, and lifting. Brace, breathe, lift, and repeat. That became my inner mantra. I’d lift myself out of the driver’s seat and walk in, facing whatever waited on the other side with strength.

The benefits of exercise are endless. Our society is saturated with the message. But there were a few unexpected byproducts I hadn’t appreciated. Rewriting the story I told myself about who I was had implications I couldn’t imagine. That tired cliché—you’re stronger than you think—comes in handy as I age.

Growing older, we face increasingly harder emotional obstacles at the same time our bodies begin to betray us. Discover what you’re capable of before those hard moments happen. You really are stronger than you think. Trust me. 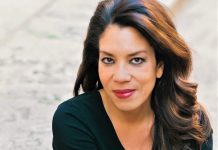