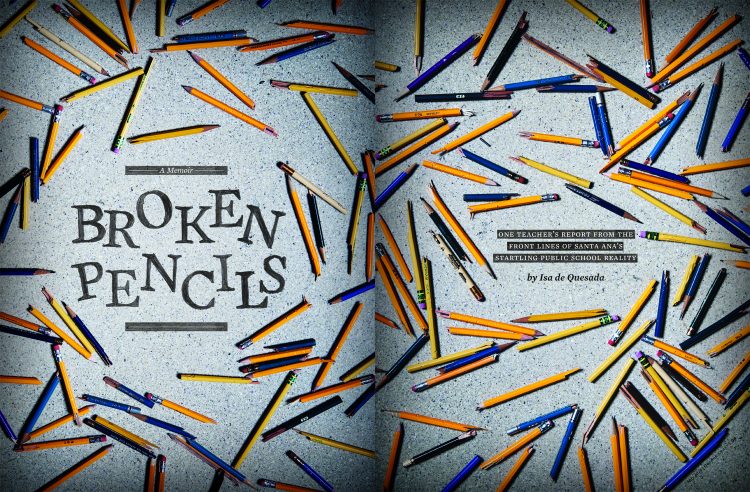 “As teachers, we’re alone in how we deal with the realities that show up in our classrooms every day. … It’s a full-time commitment by those of us who witness daily atrocities in Orange County.” —Isa de Quesada, “Broken Pencils,” May 2016

What Our Teachers Learn

As a retired 35-year teacher in the Garden Grove Unified School District, I’m able to relate to Isa de Quesada’s essay (“Broken Pencils,” May 2016). I saw so much poverty, so many children who had suffered abuse in their homes, and far too many children who had experienced gang violence. Many just needed someone to care, some support so they could deal with their lives. Many struggled to do grade-level work without good nutritious food and medical care. One girl was repeatedly beaten by her aunt, but when this was reported to Social Services she was abused even more. A boy was expected to be a good student while dealing with the beating death of his father in a Mexican jail. Many were not allowed to play outside because it was too dangerous; they often described hearing gunshots in their neighborhood. How do you convince a boy it’s important to do well in school and stay out of gangs when he’s part of a gang family and believes he won’t live past the age of 20? I had students who escaped from war-torn countries such as Vietnam, Afghanistan, Yemen, and Cambodia.

One Cambodian girl watched her grandmother drown when pirates threw her into the water because she had no money. Another who escaped from Afghanistan at age 9 had witnessed her father shot to death by Russian soldiers. I also needed to comfort children born in this country who had lost a parent or a sibling to violence. One boy was simply walking with his mother when she was shot and killed. This was not in a war-torn country. This was in Garden Grove.

As teachers we need to do far more than share our knowledge. We need to see inside these children to understand their experiences and their lives, and provide them with the support and love they need so badly. But the demands on teachers make it almost impossible to meet the emotional and physical needs of their students. I was told I needed to be actively teaching the first lesson within five minutes of school starting, and the time pressures continued throughout the day. This left little time to communicate with my students on a human level, something they so desperately needed. I thank this magazine for printing this article, and I thank de Quesada for sharing her experiences.

I send praise to Orange Coast for publishing “Broken Pencils.” The memoir was honest and heartbreaking. The struggles of teachers often are overlooked, especially in the public school system. Thank you Ms. de Quesada for your personal account and Orange Coast for enlightening the readers about life for many Santa Ana teachers.