At The D23 Expo, which is held at the Anaheim Convention Center every two years, the Walt Disney Company proudly announces projects for the first time publicly as fans gather to celebrate all things Disney. This year marked the event’s 10th anniversary with Disney Legend awards given to Robert Downey Jr., Christina Aguilera, and Ming-Na Wen, to name a few.

On top of teasing the opening of the E-ticket attraction Star Wars: Rise of the Resistance in January, the company detailed the forthcoming Marvel-themed expansion “Avengers Campus” and announced the development of a new parade and ride. Here’s what we know: 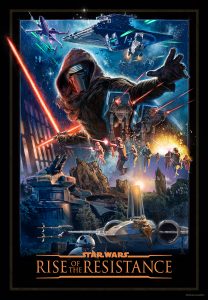 During the Parks and Resorts panel at D23, a video was shown of the resistance fighter Vi Moradi, who was created specifically for the land, giving a holographic dispatch to “recruits.” The video sets a heroic tone as Vi tells guests, “Thank you for joining the cause and may the force be with us.”

The video then cuts to guests in a transport vehicle with a dark side lightsaber cutting through the ceiling and a droid guiding us into a room filled with giant, roving AT-ATs, stormtroopers firing blasters, and flying sparks. Assuming that no special effects were used to make the video, the attraction looks as if we’ve been placed right into the silver screen.

The premise of the sleek and modern Avengers Campus is that guests will be able to train to become the next superhero and learn about new technologies to “safeguard the Earth.”

The Worldwide Engineering Brigade or W.E.B. is the setting for the Spider-Man interactive attraction where guests will sling webs to help Spider-Man round up glitching Spider-Bots.

There will also be a restaurant inspired by “Ant-Man and The Wasp” called “Pym Test Kitchen,” where Scott Lang will use Pym technology to shrink and grow food.

Expect plenty of characters from the Marvel multiverse including Doctor Strange, Black Panther, Iron Man, and Ant-Man and The Wasp. A note about guests being able to spot heroes on the rooftops of buildings speaks to the level of immersion this new land will have.

An E-ticket attraction was announced where guests will be able to fly a Quinjet and soar over Wakanda to help the Avengers. An opening date was not announced.

A new parade, featuring music by Todrick Hall, will make its way down the streets of Disneyland featuring floats telling the stories of newer movies including “Moana” and “Coco” as well as the iconic “Sleeping Beauty.”

The new attraction set inside “The El Capitoon Theatre,” a building inspired by The El Capitan Theatre in Hollywood, will celebrate the art, humor, and fun of both old-fashioned and modern cartoons. 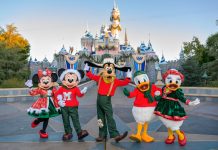 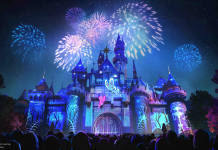 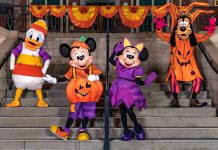