Home Uncategorized What did we cook: Hot weather edition 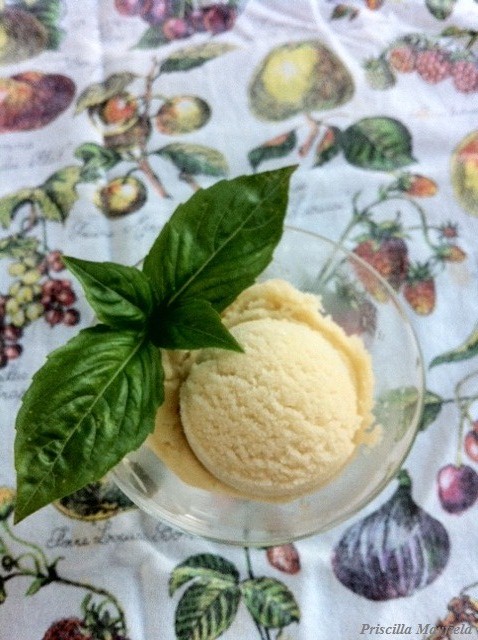 After a Saturday spent almost entirely outside in the extreme heat, from the O.C. Foodie Fest to farmers marketing to cocktail hour on the promontory, Sunday was relegated to indoor tasks. So, naturally, skiving on other household duties, I gravitate towards the kitchen, especially when I didn’t have the opportunity to cook much Saturday beyond draping prosciutto over cantaloupe and toasting rustic bread for quick and easy bruschetta with Italian lentil topping (you can read my earlier post about this simple starter here) to accompany the aforementioned cocktail hour, which actually became dinner at the end of the 100-degree-plus day.

Sunday was much more productive, cooking-wise. I made cantaloupe sorbet, which is as I’ve written elsewhere my favorite recipe from David Lebovitz’ “The Perfect Scoop” (Ten Speed Press, 2007), although it’s difficult to pick a single favorite from that rich trove. It was cantaloupe-basil this time, five or six nice basil leaves included in the purée, and a little vanilla sugar too. The characteristic muskiness of both the herb and the melon made for great flavor layering. And then sandwich rolls for tortas with the carnitas left over from Taco Friday—it was a plan at the beginning of 2011, kind of a New Year’s resolution, to have tacos of some sort, somewhere, every Friday and so far, so good on that account—riffing on a favorite recipe for Cuban bread that includes a little lard, from a long-ago (Winter 2000) King Arthur Flour “Baking Sheet” newsletter. Sometimes I strain the pork fat I’m rendering for the freezer, but for this bread I like to leave in the resulting tiny crispy bits. Finally, a rich flatbread with sesame seeds, part of which accompanied dinner, which was a beautiful piece of grilled wild salmon and a big salad of nice green leaf acquired at the SoCo Farmers Market. (Can’t take credit for the perfectly-cooked salmon, though—my husband did that on the grill outside.)

What did everybody else cook on this hot weekend? And what will we cook on the three-dayer upcoming?