Home Uncategorized Umami Burger at the Irvine Improv―Food Plus Funny 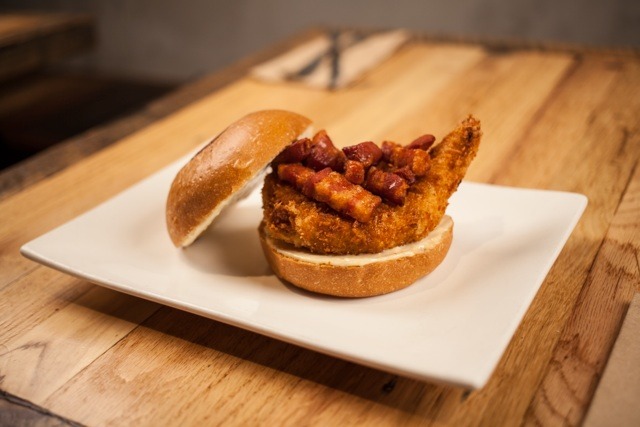 Orange County’s fourth Umami Burger opened at the Irvine Spectrum recently, the first location in the rapidly-expanding chain to be integrated with an Improv comedy theater. (The other O.C. Umamis are in Anaheim, Costa Mesa, and Laguna Beach.) There may be additional cuisine-comedy mashups in the future, but for now there’s just one and O.C. got it.

So you can nom your beer-cheddar and bacon lardon Manly Burger ($12) while being entertained by the likes of David Spade, booked on Aug. 16. But if you’re not in the mood for dinner and a show, you can just do dinner in the restaurant—or lunch for that matter. You won’t be alone—general manager Fabio Vallocchia says he sells 800 hamburgers a day made from Umami’s house-ground beef blend, served on a Hawaiian bread bun baked for the company with with a U branded on its top.

The “Un-Beef” side of the menu offers an ahi burger and a vegan “Sloppy Mami,” as well as a turkey burger with a patty made, like the beef, in-house. I’ve long thought the turkey burger category in general could benefit from more expert attention, and Umami’s molecular gastronomists have paid it some respect. Two items on the “secret menu,” which of course among Umami fans isn’t secret at all, are variations on its Greenbird turkey burger. One’s a turkey BLTA with the B as in juicy, crispy, intensely-flavored lardons of bacon that bring an umamilicious flavor blast, and the other is the Spicy Bird, a green-chile layered mashup of the Greenbird and the Hatch burger from the regular menu. Each is $12. Every Umami location has an exclusive sandwich, and in Irvine it’s fried chicken breast with maple bourbon chipotle glaze, some of the aforementioned lardons, and the house-made garlic aioli ($11).

The most famous—or maybe just least secret—item not on the regular menu is house-made cheesy tots; potatoey, crisp-on-the-outside, marshmallow-shaped pillows that are, all joking aside, a bargain at $5.