So, the Season 14 “Top Chef” final is here. Or rather, has come and gone—the contest between Newport Beach’s Shirley Chung and Brooke Williamson is done and decided. There’s no reason to be coy with the result: Williamson, the Season 10 runner-up and “Last Chance Kitchen” returnee, was awarded the “Top Chef” crown. In that first go-round, Williamson lost to Kristin Kish, who’d returned to regular competition through winning “Last Chance Kitchen.” Should future female cheftestants take note of having to battle multiple times to make it to the final?

The showdown between Chung and Williamson seemed an even match. There was considerable social-media grumbling about a telegraphed preference from show producers for Brooke, but could Shirley’s sheer cooking talent be denied? I was dismayed—and suspicious, I must admit—when, given the chance, Shirley didn’t select cooking soulmate Sheldon Simeon, instead adding the much less dependable Casey Thompson. I think there’s just no way she wouldn’t have chosen to cook with Simeon. Ah, the vicissitudes of Reality TV, where reality is a fungible concept.

It was similarly uncomfortable when Williamson “forgot” to order pork belly, and pressured Shirley to share her own stock of the ingredient, which she does. “Thank God,” Williamson says—not, pointedly, “Thank you, Shirley.” Moments like this, combined with her repeated complaints about Shirley’s vocal volume in the shared kitchen, framed Williamson in an unpleasant light. Rather than to-be-expected tough-competitor smack talk, editing made it look like the familiar telling a woman to shut up. A strange way to showcase the eventual champion.

And so, to the meal. In the first two courses, Brooke’s oyster and octopus beat Shirley’s crudo and handmade ramen. Shirley swept the third course main, the most substantial and arguably most important, with her suckling pig shank, while Brooke’s pork belly and beans looked not so good. Still, that’s 2:1 advantage Brooke.

Dessert, always a fraught field on “Top Chef,” went very differently last night. Shirley’s rice-free play on rice pudding wowed all the judges, with Padma Lakshmi crowning it her “favorite dish of the night.” Brooke’s chamomile flan, which not only doesn’t sound inspiring but apparently wasn’t, seemed on a lower plane.

A tie? Nope. Williamson eked out the win. Shirley has to be disappointed—but her cooking clearly soared, and, undoubtedly, her career will too. 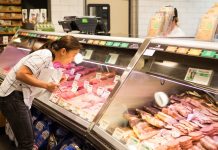