Home Uncategorized Theorem at Portola Coffee Lab―Coffee, One Step Beyond 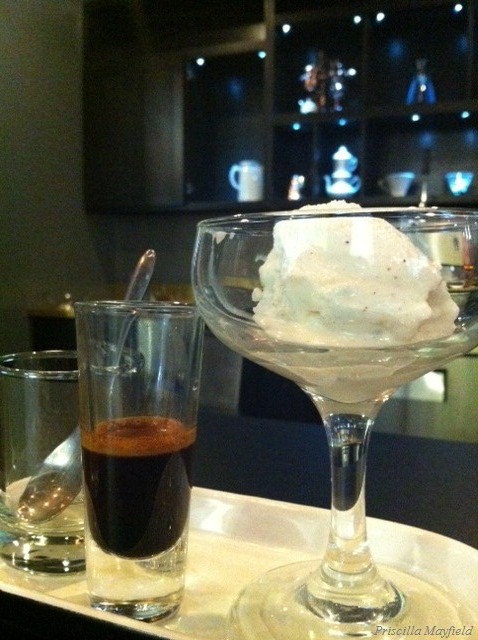 Portola Coffee Lab in Costa Mesa’s The OC Mart Mix is the utmost in cutting-edge coffee culture. , Customizable brewing options range from various pour-overs to espresso from the U.S.-built Slayer machine that allows baristas to minutely fine-tune pulling pressure. Co-owner Jeff Duggan’s search for just the right beans (all organic and fair-trade) recently took him to Ethiopia to meet with growers.

Starting tomorrow, his shop’s new Theorem adjunct—a modernistic six-seat bar—sets a course for the coffee stratosphere. It’s coffee geekdom magnified, with a dose of molecular gastronomy. For the lucky group in the comfortable, low-lit space behind sliding translucent panels, it’s quite the trip. At a recent preview, Truman Severson, the nicest mad-scientist barista you’ll ever meet, demonstrated the type of coffee-mind-expanding specialties guests can expect when they belly up to the slow bar.

The first of three was a cappuccino that Severson crafts with extra-rich Straus Family Creamery milk to a precise, moderate temp that’s immediately drinkable, avoiding the changes in flavor and texture that occur during cooling, which baristas call “dying.” The second, a Filtron Fizz, was a surprising, refreshing cocktail-shaker trip with cold-brewed-coffee and tonic water, plus honey steeped with peaches and citrus. Our last sample was not a drink but an affogato, the light Italian ice cream dessert with a shot of espresso. At Theorem, affogato emerges from a liquid-nitrogen cloud, as Severson freezes vanilla ice cream to individual order. It’s a great show, but more than mere stunt—faster freezing means smaller ice crystals, which makes for an exceptionally creamy result, made even better with the addition of Severson’s expertly pulled espresso.

Theorem is reservation-only, and the changing menu varies from $15 to $25, though walk-in seatings and individually-priced drinks might be available at times as the journey progresses. (Reservations available online; click here.) Barista Severson’s own coffee odyssey has spanned the spectrum, from a Starbucks in Garden Grove to the Los Angeles outpost of Chicago’s respected Intelligentsia. The Starbucks has since closed. Significant? Probably—I don’t think there’ll be any going back now.