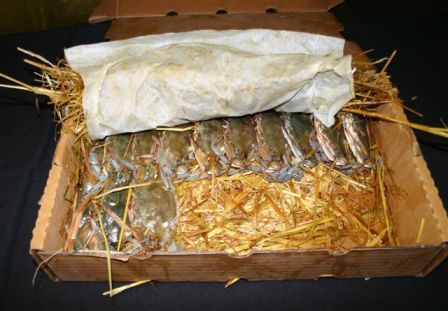 While soft-shell crab dishes are available year-round in the frozen version, nothing beats fresh. For prized Chesapeake Bay blue crabs from Maryland, soft-shell season runs roughly from April through August, so there’s still time to enjoy them.

Soft-shell crab is caught after molting, before its new shell has hardened. After a sauté or a dip in the deep fryer, the entire crab is edible. A well-prepared soft-shell crab has a flavor/texture interplay that is subtle and elegant, and unlike any other dish.

I am happy to report that I recently had what might have been the best soft-shell crab ever. It was at Mr. Stox, the venerable Anaheim restaurant owned by the Marshall family since 1977, run by brothers Chick and Ron Marshall, and Ron’s wife, Debbie. While researching the pretzel scene in Orange County (yes, there is one; more about that later) I noticed soft-shell dishes on the menu. Talk about collateral benefits! Fried crisp in a savory coating that includes breadcrumbs from Mr. Stox’ made-in-house sourdough, the super-meaty crab is served on a bed of spinach and grilled tomatoes, with a piquant garnish of pickled carrot strips and a delicious balsamic vinaigrette. It’s one of the freshest, most well-executed dishes I’ve had in a long time, and really, kind of a bargain at $16.95 on the starter menu. (On the entrée list: sautéed soft-shell crabs with asparagus and angel hair, $27.95. Lemon-vodka cream sauce? Sounds good.)

Turns out the Marshalls have professional connections to Maryland, which helps to explain how Mr. Stox chef Scott Raczek gets such high-quality soft-shell crab, and why his blue-crab crab cakes are a long-time menu item. While living in Maryland, both Marshall brothers worked in high-end restaurants, where they gained more than a passing familiarity with regional classics like she-crab and turtle soups, shad and shad roe, and of course, a host of crab preparations.

“When we purchased Mr. Stox in 1977, blue crab meat was not available fresh in Southern California,” says owner Chick Marshall. “As we were set on introducing this wonderful product to Orange County, we arranged for shippers we knew in Baltimore to send it by air.” Over the years, local seafood vendors began to carry it too, making it possible for the restaurant’s signature crab cakes to be a year-round item.

Not so with fresh soft shells. Chick Marshall says, “Soft-shell crabs are available fresh from spring through August, and are still shipped live packed in straw” (see photo, at right, of crabs as shipped). Marshall expects to be able to offer soft-shell dishes through the end of the month. “This year they were late becoming available, so maybe we will be lucky and have them a bit longer, into the fall.”

Other O.C. soft-shell sources are King’s Fish House in Huntington Beach, Laguna Hills, and Orange, serving several preparations of flown-in-fresh crabs, and Costa Mesa’s Pizzeria Ortica, where chef Justin Miller often features them on his specials menu. If you’d like to try your hand at home, the crabs arrive daily in season at Santa Monica Seafood in Costa Mesa, where they sell for $7.99 each. Call first for availability—probably a good idea for the restaurants too.