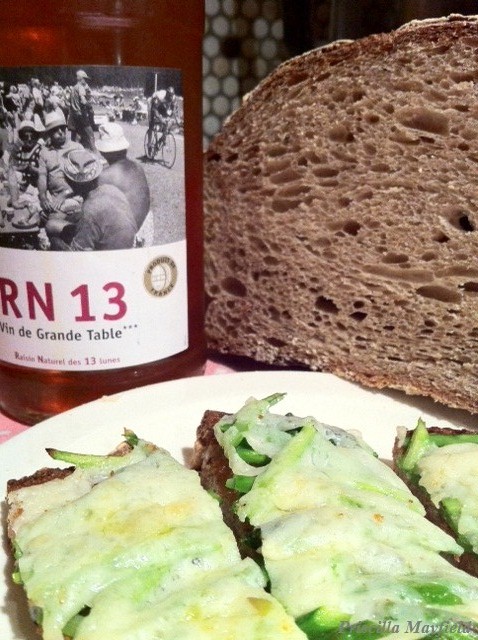 You didn’t think I’d let the 2012 asparagus season come and go without making a big deal of it, did you? I’ve made the recipe for Sicilian pasta and asparagus topped with an egg I wrote about last year in Taste of Orange County twice already, for instance. (Get the pasta recipe here, and see if you don’t make it multiple times yourself.) And the spring spears, along with fresh artichoke hearts, support the English peas that star in my springtime ragoût, which I posted last week.

Last fall, after Alain Coumont, founder of Le Pain Quotidien, gave me a copy of his charming, self-published 2009 book “Alain Coumont’s Communal Table: Memories and Recipes,” I ripped through the history of the now-global bakery café chain and unusual assortment of recipes. I filed one away for future use from among the tartines, the light, open-faced sandwiches that are a trademark of the restaurant.

And yes, it uses asparagus; skinny, raw, dressed. And, features a callback to the pecorino we met in the pasta dish above. Finding myself near Le Pain Quotidien’s sole O.C. location (so far) in Fashion Island the other weekend—you can read my post about its opening here—I took home one of their immense, delicious, part-whole-wheat sourdough boules, used for tartines at the restaurant. It’s one of the very best breads you’ll find in O.C. (never can resist the café au lait, either—of course it’s organic, as are all their beverages, but more than that, it’s just SO GOOD.) I had a big wedge of great pecorino (use the kind with imbedded black peppercorns, if you can find it), and a bottle of new-harvest Sicilian olive oil at home. Combined with the asparagus and toasted sourdough, it was sort of the best cocktail bite ever, especially with a glass of chilled rosé that came from Coumont’s own Languedoc vineyards.

Pecorino Romano, in a solid piece

Cut each asparagus spear in half lengthwise and then into 2-inch pieces. Dress with olive oil, salt, and pepper, tossing to coat.

Under broiler, toast bread on one side. Pile asparagus salad on untoasted side. Use a vegetable peeler to shave pecorino over the tartines.