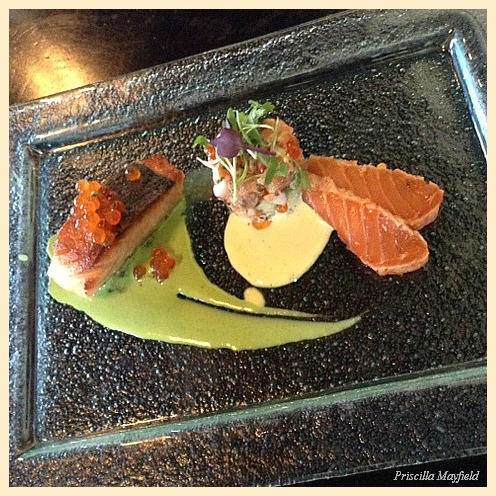 There was a lot of Skuna Bay salmon in play at the The Catch in Anaheim Tuesday, as five chefs faced off in a competition cooking with the Vancouver Island “craft-raised” fish. The winner of Tuesday’s contest advances to a semi-final round, with hopes of ultimately making it to Louisville in May for the finals, held days before the Kentucky Derby.

The winner was Andrew Sutton of Napa Rose, and judging by his entry, he has a serious shot. Literally judging—I was on the three-judge panel at Tuesday’s event, and Sutton’s dish, an elegant use-every-part-of-the-fish trio, was our unanimous pick. (Florent Marneau, chef-owner of Marché Moderne, and Anne Marie Panoringan, a writer for OC Weekly’s food blog, were my fellow judges.)

Sutton’s Skuna Bay Salmon Assorted Tastes and Textures, Southern California Style may have a long name, but it’s accurate. During the prep and cooking, I’d watched him zest a small mountain of tangerines and lemons, which figured into the light citrus cure on the exterior of his salmon belly sashimi and the puddle of golden, emulsified citrus vinaigrette beneath. A pan-roasted fillet was perfectly moist and translucent in the center, its tenderness the ideal contrast for ultra-crisped skin. My favorite of Sutton’s three preparations was an escabeche featuring salmon exactingly cut in tiny cubes, serrano chilies, and more of that California citrus in the mix.

Each chef cooked at separate stations in The Catch’s large, open kitchen. They began with a whole, 10-to-12-pound salmon—breaking down and filleting the fish was part of the criteria. Skuna Bay salmon are remarkably consistent due to the controlled environment in which they’re raised, but the resulting fare differed as much as the chefs who prepared it.

Sutton offered his dish on the Napa Rose menu for a few weeks before the contest—“I needed to get in some practice,” he says, and he promised to let me know when he’ll start serving it again. In the short term, he’ll be busy with the regional finals competition in Los Angeles in April, and after that—quite possibly—a trip to Churchill Downs in May.