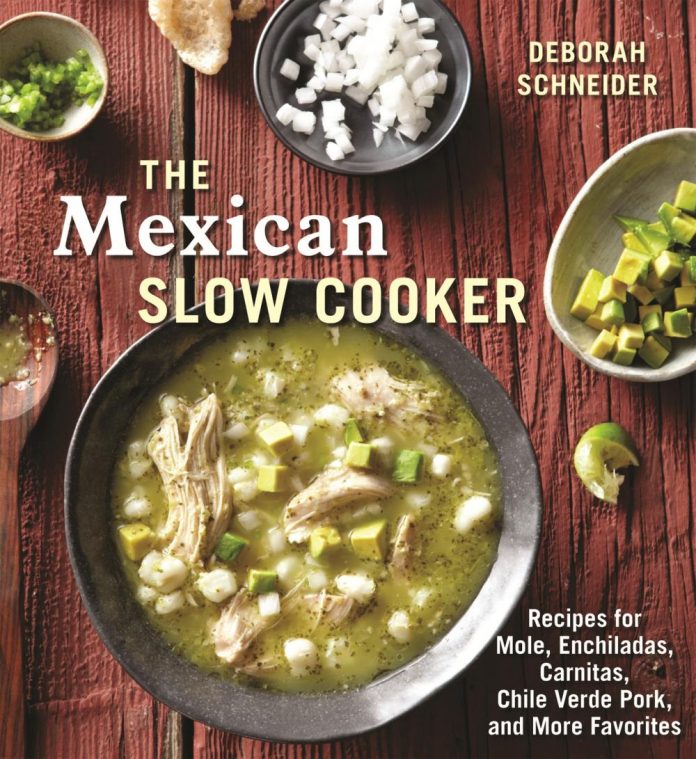 I’d never owned a slow cooker, but was spurred to buy one thanks to Deborah Schneider’s new “The Mexican Slow Cooker” (Ten Speed Press, $20), which comes out today. This is the fifth book for Schneider, chef-partner of Sol Cocina in Newport Beach, and I suspect that even seasoned slow-cooker cooks will find a lot of inspiration inside.

With these recipes, actual Mexican cuisine will emerge from even the most unprepossessing slow cooker. Of course, today’s slow cookers range far beyond modest, and Schneider offers a succinct primer on what to look for, like an automatic switch to “keep warm” at the end of cooking, and digital time setting. (I got the keep-warm, but not the digital.)

Divided into chapters for soups, mains, street-food favorites, basics like beans and other components, and even desserts, the book benefits from a one-recipe-per-page design. (Something I like to see.) All the ingredients can be found in a large supermarket. I found costillos, pork-rib tips, for the chipotle-tomatillo sauce recipe in a Mexican meat market, but Schneider says easy-to-find pork shoulder chunks could be used instead. Her corn on the cob recipe is a little revelation all its own—so easy, and the corn takes on a roasty effect that’s really good.

A recipe for Chiles en Escabeche in the basics chapter piqued my interest. Partly because of the hit of tequila called for, but mostly because the quick pickle of spicy, crunchy carrots and other vegetables spiced with jalapeños has always been a staple in my fridge. Slow-cooker escabeche makes sense—low, controlled heat preserves the integrity of each vegetable, and the long soak encourages the flavor exchange that characterizes escabeche—in a piece of carrot, for instance, you get vegetal sweetness, with a big wallop of chile hotness right on its heels. Schneider’s recipe calls for a nice mix of vegetables, too, including cauliflower, and chayote squash, the latter taking up the seasonings in a very good way. Don’t be surprised if it becomes a staple in your fridge, too.

1 carrot, peeled and sliced on an angle

Combine all the ingredients in a 5-quart slow cooker. Cover and cook on low for 21/2 hours, or until the vegetables are just tender when poked with the tip of a knife. Let cool, then cover and store in the refrigerator, leaving the vegetables in the pickling liquid.