Home Uncategorized Skuna Bay Salmon, and More, New on the Menu at Taps in... 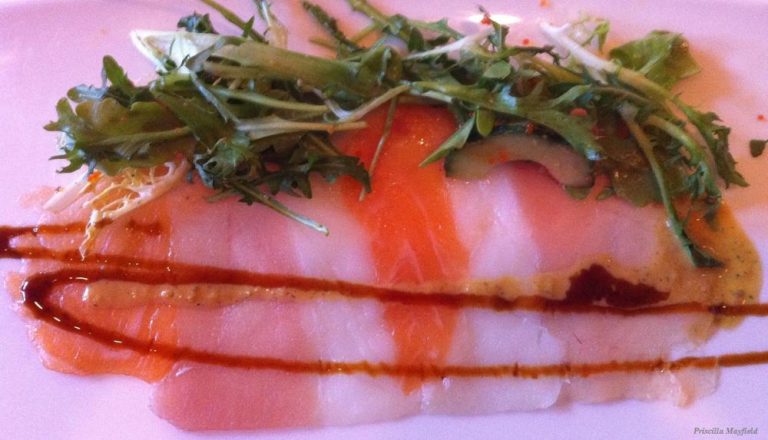 As successful restaurants often do, Taps Fish House & Brewery in Brea has drawn other businesses into its orbit, making the city’s formerly sleepy, if nicely redeveloped, downtown district something of a destination. Taps remains the big dog, but is not resting on its laurels. New menu items include the introduction of Skuna Bay “craft raised,” sustainably farmed salmon from Vancouver Island. A big advantage of the Skuna Bay salmon is its year-round availability, though at a recent preview, Tom Hope, director of culinary for the restaurant, said they also serve wild salmon in season, including the rare ivory king when available.

In a new trio of sashimi and baby greens starter ($15), stripes of Skuna Bay salmon alternate with white Alaskan halibut and pale-pink Hawaiian albacore (see the photo at right). The sweet, super fresh fish is delicately thin from careful pounding, garnished with radish sprouts and a miso-citrus-ginger vinaigrette that contributes tang and umami. New on the meat side of the restaurant’s menu is jerk-spiced all-natural pork tenderloin with pub-style mac ‘n’ cheese ($25), inarguable comfort food. Executive chef Manny Gonzalez marinates the pork overnight in house-made jerk seasoning, and adds the surprise of red-eye gravy made with espresso to the finished dish. The mac ‘n’ cheese ingredients can vary, except for the oversized, ribbed elbow pasta—Gonzalez says Taps’ expansion of charcuterie and cheese offerings means there are always interesting cheeses around to use. On that note, take advantage of brewmaster Victor Novak’s suggestions for beer-cheese pairings. Eye-opening, and delicious.