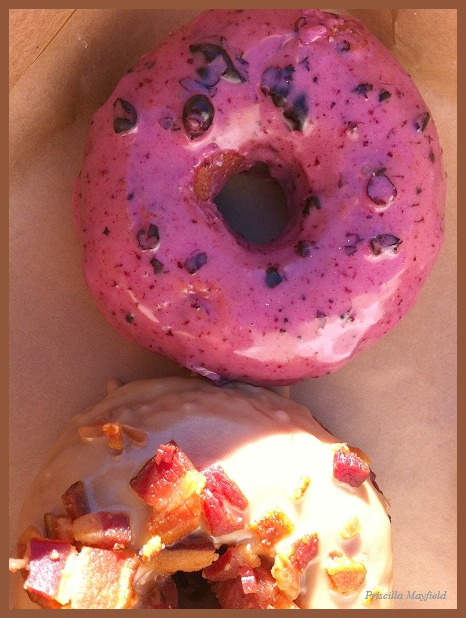 Sidecar Doughnuts & Coffee was, I’m told, giving away its products at its test kitchen on Saturdays for a time, awaiting completion of construction on its storefront while creating instant, hardcore fans. The store (270 E. 17th St., Costa Mesa) is slated to open next month, but in the meantime the fabulous doughnuts can be ordered 24 hours in advance for pickup, or delivery ($15) via the company’s rehabbed and customized vintage panel truck.

There’s more than a whiff of the Pacific Northwest at Sidecar, from the Voodoo Doughnut-esque bacon-maple (though it’s raised round-with-a-hole here, and classic bar shape at Voodoo) to the regional delight of huckleberries, which grow wild in the country’s upper-left quadrant. Sidecar gets theirs overnighted from Oregon Mushrooms on an as-needed basis—which will probably be more like always once everybody tastes them in the purple-stained, intensely fruity icing. Either is $3.50—order a baker’s dozen and the 13th doughnut is free. The coffee half of the concept is Portland’s influential Stumptown, a small-batch roaster poised for wider recognition, much like the Bay Area’s Blue Bottle.

You can check out available doughnut flavors on Sidecar’s web site—sadly, a Monte Cristo doughnut mentioned by friends who tried it won’t be made again until the store is open. That’s right—Monte Cristo doughnut. I suppose the other flavors may be OK, even really good, but any fellow fan of the superlative ham, cheese, battered-and-fried sandwich will know immediately that this may be the highest, best use of a doughnut ever.

Sidecar’s doughnut-and-coffee-mobile reminds me of the Helms Bakery trucks that used to ply SoCal neighborhoods—and doughnuts were the one thing my Mom would occasionally let us buy from the Helms man, handing over a nickel or a dime, whatever it was, to select one (plain cake for me) from a pull-out wooden drawer. But you can’t snack on nostalgia—the doughnuts emerging from the Sidebar truck’s custom-made drawers will become a whole new tradition.