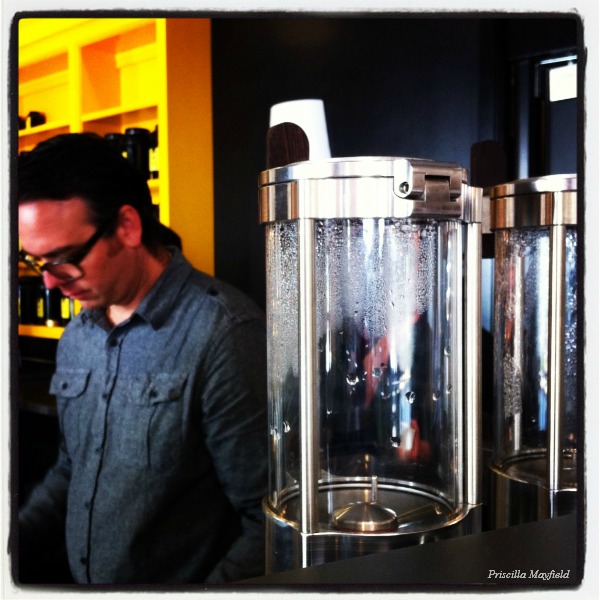 Seventh Tea Bar, adjunct to Portola Coffee Lab in The OC Mix, doubles down on its commitment to tea drinkers with a handsome—and expensive—new contraption. Owners Christa and Jeff Duggan recently installed a $15,000 Steampunk 4.0, made by Alpha Dominche in Salt Lake City. The brushed-metal, tea-brewing behemoth has burbling glass cylinders in which four different teas from Seventh’s stock of single-origin leaves can be brewed simultaneously, each with precise fine-tuning of temperature and steeping time.

Regular readers might remember that I’m a devoted tea drinker, so I’m truly impressed by such serious investment in my favorite caffeine delivery system, and also by the Steampunk-steeped teas I tasted at a recent preview. Seventh’s especially delicious Taiwan oolong is from family-owned Mountain Tea of Cerritos, whose owner Chicco Chou was on hand—geek-level tea intel, straight from the source. Chou told me the processing of this oolong, called Feng Huang Gui Fei, actually starts right on the plant—oxidation begins when insects called leaf hoppers nibble the leaves. (Most tea, of course, is processed after picking—and not by bugs.)

The Steampunk was originally developed as a coffee-making appliance. It’s based on the siphon brewing method enjoying a renewed vogue in “third wave” coffee shops like Portola, which makes a good cup if you don’t mind waiting for sometimes lengthy preparation times. This is a non-issue with Steampunk, which dispenses drinks in about 2 minutes. Is it any wonder the Duggans are considering a Steampunk for Portola in the not-too-distant future?