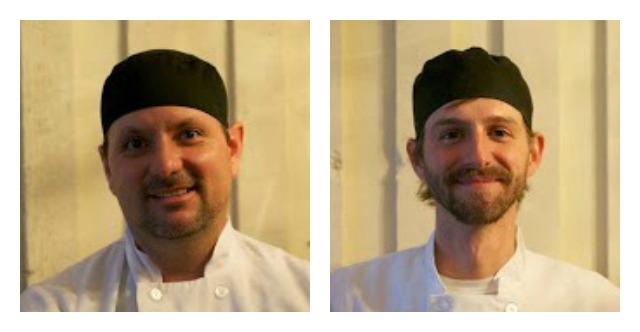 If you follow me on Twitter—I’m @PMMayfield there—you may have seen my Tuesday-morning tweet about changes at ambitious newcomer Ways & Means Oyster House in Orange. I’d just confirmed that multi-Michelin-starred founding chef Conrad Gallagher left the restaurant in December, when his consulting contract ended.

Two Ways & Means veterans, Justin Odegard (left photo) and Benjamin Wallenbeck (right photo), will be taking over, partnering in the kitchen as co-chefs de cuisine. Gallagher said of the switchover, “I was hired as a consultant to help develop the menu, serve as chef for a short period, and train the new chefs. My contract was always meant to be short-term, and it finished once the restaurant was up and running. It was a gratifying project and I wish them all the best.”

The new chefs covered a range of Orange County dining before landing at Ways & Means. Odegard previously worked at the Arroyo Trabuco Country Club in Mission Viejo, and Roy’s and A Restaurant in Newport Beach. Wallenbeck did stints at Chapter One in Santa Ana, and more recently, Anqi in South Coast Plaza.

In December I wrote in Taste of Orange County about the pristinely fresh and beautifully presented oysters I had at Ways & Means—with no idea of Gallagher’s imminent departure. While chefs come and go, and the tremendous buzz surrounding the restaurant’s opening has cooled a bit, oysters with classic mignonette are eternal. Or so I hope.